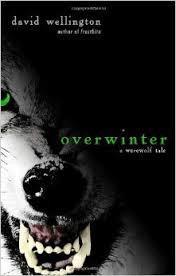 How Far Would you Go for Redemption?

Cursed for life by the man who killed her father and now loves her, Chey is slowly losing ground as the lycanthrope in her drives her toward madness. Set in the frigid arctic Powell, the man who cursed her in werewolf form, seeks redemption for the actions of his wolf by taking her on a journey to where the curse began in the hopes of giving Chey back her humanity before it is too late. However, when another werewolf shows up on the scene, things get complicated, especially since she is being followed by a hunter seeking revenge for the slaughter of his family.

Overwinter: A Werewolf Tale is a gripping novel that captures the essence of folklore, including native animal spirits and the balance of the world when the very first people existed, the ones whose betrayal of a powerful animal spirit created the werewolf curse that now dooms so many. Haunted by a life of brutal killings, Chey and Powell try to live far away from the humans their wolves want to destroy, and they struggle onward with the help of Dzo, a friendly animal spirit, to restore their humanity. Only Lucie, Powell’s old lover, is the bad penny that always turns up. Lucie loves being a werewolf, and her violence will soon cost the disorderly group everything.

I discovered after finishing this novel, which was one of my many purchases from Borders as they sold off the last of their stock (such a tragic day), that it is the sequel to Frostbite: A Werewolf Tale which I, in a bout of extreme excitement, have already ordered. Obviously, readers don’t need to be familiar with Frostbite to enjoy Overwinter since the dynamic nature of the story introduces the conflict between Chey and Powell early on as they trek through the arctic together. Chey’s inability to totally forgive Powel for the actions of his wolf which, like traditional werewolf tails, are done unbeknownst to him creates a complexity in the novel. The transformation is brought on by the moon, and humanity is eradicated as the wolf takes over. Chey, who knows this, likewise cannot completely divorce herself from the fact that the man who is now her friend and wants to be her lover also killed and ate her father. Yet, an attraction is arising and Chey is conflicted. The addition of Lucie, an old lover of Powel, ups the competition and complicates the arrangement to head north and find the cure.

The traditional werewolf lore (transforming at the full moon, an aversion to silver, immortal life, the inability to remember what one has done in wolf form) is complimented by the myths associated with the animal spirits. While at first the introduction of these strangely omnipotent beings is sketchy, readers soon fall into the atmosphere and the world which we now presented into by an undergirding of the supernatural and the ancient, giving the story a distinct flair of ancient folklore.

Varakin, the vengeful man bent on killing the werewolves, is an interesting and honor bound antagonist. Varakin certainly isn’t quite the villain, but neither is he the savior as his soul wars within him. He desires justice for what Lucie has done and yet also finds it difficult to kill the other werewolves who are merely innocent bystanders seeking their humanity back. His decision is weighted and could go either way, and the reader is made to care for both the werewolves and Varakin to an equal degree, making it impossible to truly take sides and adding dimension and external conflict to a tale rife with the internal conflict of a dualistic and dangerous nature.

As the story progresses, the action is amplified as the werewolves are thwarted by government forces concerned about the safety of nearby citizens and secretly in league with an oil company. There are many impediments to the werewolves finding the location of origin and even more impediments in performing the cure correctly. The breathless pace of the last several chapters captures the frantic rush to the end as well as Chey’s dissipating mind, creating a sense of time in narrative and making readers emotionally invested. Previously, werewolves had never been my favorite, and although I have a yen for horror, I mostly disregarded werewolf stories for zombie and vampire tales.  I was enjoying Overwinter so much, however, that I even purchased a werewolf plushie to snuggle with while reading not to mention more werewolf novels including Frostbite.

While I cannot talk about the ending without giving it away, let’s just say that readers won’t soon forget the final confrontation with the wolf spirt nor the sacrifices and fears that occurred along a journey that can only be called epic and shattering. Highly recommended.