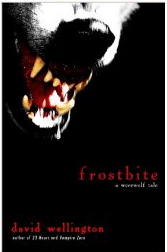 A lone woman, trekking through the desolation of the pre-Arctic forest is driven by need yet abandoned in fear – some mysterious mission half completed. As night falls, the chilling howl of starving wolves fills the air and Cheyenne, terrified, is driven up a tree. It looks as though she will not survive the night until a large wolf, a mythical like creature with power and blood lust swipes her bare ankle with its claws. Stranded, Chey waits until morning comes eventually finding a strange man who, in his battered pickup, leads her to the man she has been searching for all along – the heart of this secret, cold quest.

Haunted by the gruesome memories of seeing her father eaten alive by a werewolf during a father/daughter trip, every moment afterwards has turned Chey into a warrior bent on destroying the wolf that consumed his life. Only, Powell isn’t everything she expects, and when the full moon rises, she discovers what the festering in her ankle means and what she now is. Strung between the world of humanity and revenge and desire to survive as a beast, Chey must decide if her adversary is now her friend. Meanwhile, government entities and Chey’s secret forces are clustering ever closer, and now Chey is on the outside of their web of protection.

I actually discovered Frostbite: A Werewolf Tale  through its exceptionally fast-paced, almost stand-alone sequel Overwinter. Overwinter depicts a more peaceful alliance between Powell and Chey, yet with the strain of a horrific underlying history between them, that haunting image of a dead and feasted on father. The idea of coming to forgiveness and redemption and how we cannot entirely let things go is a strong current through the sequel as is the breathless, fast-paced action and the incorporation of mythology and Native American representations of animal spirts. I became so enamored of the unique mix of storytelling and emotional current that I instantly ordered Frostbite, expecting the first novel to go further into Chey’s traumatic past and the confrontations/conversations she must have had with Powell. After finishing Frostbite, all I can say is that I am glad I discovered the sequel first, otherwise, after reading the first book, I would return neither to this series nor this author.

Frostbite is incredibly slow setting the initial conflict and it’s well into the book before readers (especially readers who start at the beginning of this two part Werewolf Tales series) understand what Chey is looking for and why. The compelling tension of the second novel is absent and the plot drags and drags. Chey is unsympathetic through most of the story, mostly because she remains mentally closed off to us and the impetus for her revenge feels more like a plot device than a life spent in agony, her father and his remembrance only coming up once, in the disturbingly gory death scene which provides the only added information that Overwinter doesn’t already cover.

The confrontation between Chey and Powell never truly comes. Neither has “the talk” that we presume must have occurred before Overwinter. Chey’s sudden desire to continue living as a werewolf contradicts what little we know about her, and her sudden alliance with Powell never puts any of the initial issues to rest. What of the monstrosity Powell was building of human skin and the possibility that her father was a part of this mechanism? She never asks or even thinks about it. The issue is never addressed verbally or mentally and the first part of the novel is merely spent setting things up and leaving readers to wonder what is happening and what the central conflict of this story (if there is one) addresses: werewolf vs humanity, forgiveness vs survival, monster vs death, etc.

As for actual werewolf action – there is very little. The novel moves like an asthmatic snail climbing uphill in a pollen storm. When the wolves finally appear, we’ve long since lost interest. Admittedly, Frostbite does a better job with description and we can actually see these dire beasts. However, the werewolves come into the story far too late to be interesting and the motivation behind their bestiality remains cloaked by only the vaguest notions of what compels them, unlike the sequel.

The conclusion flatlines as Chey goes through a ridiculous confrontation in an overly sludgy radioactive town where the compost of old cars has been dumped into a lake where she is marooned and weakened. Her continual last minute escapes aren’t remotely believable, even for the super humanly strong, and since Chey hasn’t tied us into her feelings, which must be complicated and vulnerable (does she hate the werewolf as much now that she is one?), we don’t especially care if she survives or not. The ending portions of the novel, unlike the rest of it, are however, fast paced meaning that the action scenes end quickly and take up little page space especially when compared to the endless set up.

Overall, readers interested in werewolf lore, unique or traditional, should skip Frostbite and go straight for the sequel instead. Not recommended.