Journal of Best Practices, The

The Book of Love 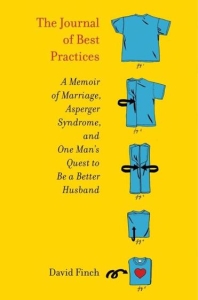 I’m perfectly willing to admit that my ideas of romance may not be typical. Rom-coms make me snarl, chick lit gets thrown across the room (unless it’s a library book, of course!), and flash-mob wedding proposals cause me physical pain. So it’s high praise when I say that this is one of the most romantic and funny real-life love stories I’ve read in years. Check out our book trailer review.

The full title is The Journal of Best Practices: A Memoir of Marriage, Asperger Syndrome, and One Man’s Quest to Be a Better Husband, which in itself slyly sums up the fussy, exhausting, overly precise compulsions of those who have Asperger’s syndrome. After being diagnosed with Asperger’s syndrome and belatedly realizing how it had damaged his failing five-year marriage, Finch began obsessively writing notes to himself about how to be a good husband — scribbled onto envelopes and Post-its and stuffed into a nightstand drawer — which he and his wife half-jokingly called “the journal of best practices.” The notes range from the funny (“Apologies do not count when you shout them”) to the seemingly trivial and obvious (“Don’t hog all the crab rangoon”), but for someone who just doesn’t get empathy or listening or social cues, it’s all equally mysterious and equally important.

Finch throws himself into the project with his trademark obsessive, intense focus, which is initially no improvement — he just replaces one set of boorish, insensitive behaviors with another, like nagging his wife for weekly “performance reviews” or interrupting her precious alone time to proudly give a PowerPoint presentation on his latest insights. One of the hardest challenges for him is inaction: listening silently to others’ woes without trying to offer solutions, or backing off after a negative interaction, rather than making things worse by trying to fix it while tempers are still hot. (Come to think of it, that might be a problem for most men.)

Along the way, Finch comes to understand how his parents’ marriage influenced his outdated assumptions about gender roles: the husband as breadwinner, the wife as stay-at-home mom. He grapples with his irrational expectations toward his wife, understanding and supporting her career, but invalidating all the difficult parenting and housework she does on top of that so that his life can run more smoothly. Eventually, he sees that he was basically one more child she had to care for — demanding, selfish, and prone to screaming tantrums if he didn’t get his way — not a supportive, equal partner helping the family to work as a team.

While this book is a fascinating glimpse into the minds of people with Asperger’s, it’s equally compelling as a portrait of a modern marriage, with overworked, harried spouses struggling to balance careers and children and social relationships while keeping their own connection alive. Just about anyone who’s been in a relationship (or would like to) will appreciate Finch’s rueful humor, horror stories, and hard-won wisdom, all told in a funny and genuine voice. Best Practices is charming, witty, and often sweetly romantic — for those who prefer love stories between real, flawed people to saccharine, insipid chick-lit.