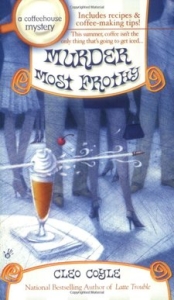 For Clare Cosi, manager of the Village blend, it’s a joyous time for some summer fun away from the grit and bustle of New York, hanging out in the swank Hamptons with her millionaire friend, David Mintzer, and helping to get his new coffee restaurant, Cuppa J, off the ground and ready to dazzle the excessively rich and exclusive. This little summer away from it all, basking in the ocean and working with all that lovely java, is brought to a jarring end when David’s all out party ends with a man shot – a man who looked just like David. Is Claire’s friend the intended victim? Millionaires moving into old land with new money are sure to make enemies, and David’s shady neighbors, each with reasons to wish him dead,  are just creepy enough to stay on Claire’s alert, even though the police and David push aside her theories. Convinced that the murder and intrigue is far from over, Claire begins to do some investigating on her own, following up on a mysterious pair of fin prints left in the mud and meanwhile attempting to deal with friction between her ex-husband, her wild-child daughter, and her mother-in-law.

I was delighted to return to the Coffeehouse Series, long one of my favorite cozy mystery escapes, after a long and un-intentional break, mostly occurring due to the slowness of a new book order and the thousands (yes thousands) of books I own, not to mention the ones I am asked to review. While going through the shelf of doom, aptly named because my books are all messy and disorganized, I discovered this little gem and with fond memories jumped back into Clare’s cozy, yet high drama/tension world. And yes, I most certainly made coffee while reading, slumped back into my dark expresso covered leather chair with my mocha colored electric blanket. Yes, I did this whole thing just right.

Clare’s world is a unique combination between the cozy, the lonely, and the seedy. Grittier aspects of life, including her edgy business partnership with her suave, yet philanderering husband with the ex-cocaine habit, her daughter’s budding interest in the world of clubbing and drug taking, and of course, the details of murder give the characters something to worry about. Unlike some cozy series, such as the Hannah Swenson series, the characters aren’t sheltered from the brutal elements of life, including broken hearts and complicated relationships. This aspect of realism has long made the Coffeehouse Mysteries a favorite on my list because, beside the murder and the subsequent investigation in each novel, the developing aspects of the characters’ lives and the complexities of their worlds is story enough to keep readers invested.

The relationship forged between readers and Clare is already strong by Murder Most Frothy which is the 4th mystery in the Coffeeshop Series. Readers new to the series will still be able to jump right in with no issues since Cleo Coyle gives enough background details to put us right in Clare’s mind, even reminding previous readers about events in the series that they may have forgotten. After several accidental years away from the series, I was quite grateful for this reintroduction myself.

The atmosphere is lush with description and attention to detail down to just the right cup of coffee or a beach right before a storm breaks on the night of a murder. The pace moves along nicely, balancing the descriptions and cozy aspects with revelation of potential motives and clues, drawing Claire deeper into the sleuthing and involving readers in the tension of her potential danger, not to mention several more attempts on her friend-in-denial. Just as the waters start to get muddied, Claire finds a hot, and I do mean hot, lead that might hold the key to the entire mystery and potentially some of the needy places in her own heart.

The conclusion, while a little bit rushed in a breathless sort of way, is none the less satisfying. Both the threads of Clare’s life and some of her unrequited (and unacknowledged) feelings are addressed as is the final confrontation and revelation of the murder. Although, let’s be fair, the murderer, once caught, just gushes out everything in a convenient manner – but this is a cozy mystery after all. The change in setting and the summery-vacation feel of the atmosphere were a nice touch while still keeping readers in the loop about coffee on-goings and the Blend’s progress. Re-addicted, caffeinated, and ready to go, I’ve already picked up and begun reading Decaffeinated Corpse. It’s certainly good to rediscover an old favorite! Highly recommended.