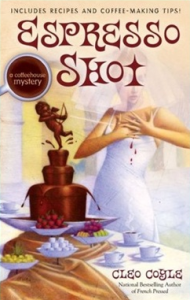 Clare and her new pastry chef friend are about to hit it big time by providing coffee and dessert for one of the most illustrious society weddings of the year, complete with a solid gold statue centerpiece from a famous (and flirtatious) artist. Problem? The wedding is for Clare’s womanizing ex-husband who still loves her and his trend-setting, hard as nails fiancé, the immaculately cruel Breanne Summour. As if this doesn’t provide enough emotional baggage, when friends of the bride start dropping dead Clare is pulled in by her wheedling ex to save his finance’s life with a little sleuthing which, of course, unearths the bitter grounds of both Matt’s and Breanne’s past. Meanwhile, Matteo’s mother is scheming to get the two exes together again before the nuptials progress, and hunky Detective Mike Quinn is hovering in the background, afraid of losing the woman he loves. What a tangled web!

Espresso Shot, seventh in the Coffeehouse Mystery Series written by the husband and wife duo who assume the pen name of Cleo Coyle, cranks the cozy while bringing some resolution to long held will they/won’t they questions. The first hardcover edition in this series, the normally tight page space is fluffed out to 364 pages, slowing the plot with filler, but also allowing readers to fall into this world and spend time with some of our favorite characters longer.

The dynamic tension of Matt’s and Clare’s relationship is finally resolved in a manner that is realistic and satisfying if not set-up by previous novels in the series. Clare’s emotion of truly losing her ex-husband for good, combined with her distaste for the scheming Breanne and her feelings of true concern over Matt’s future, forecast a complex character that we, as readers, identify with. This is perhaps Clare’s strongest novel yet in that we truly see her feelings for her lover and her husband brought to the forefront and discover just exactly what she is made of when she finally makes the decision that has been hanging over her since the beginning of the series. Always nice to see a long running love triangle solved, and Espresso Shot does this in a satisfactory, if not completely perfect, way.

Where I have qualms as a reader, somewhat quelled by the generally easy-going, cheerful nature of the cozy mystery genre (really, aren’t we asked to suspend belief?), is the long running intimation that somehow Breanne was bribing or otherwise finagling Matt into her arms. This heavy handed hint is suddenly dropped in favor of an actual, albeit oddly complicated, love story. Breanne herself, a character we’ve long loved to hate, is given more of a three dimensional approach, so this helps readers to see past the sudden Matt/ Breanne involvement and perhaps re-evaluate our preconceptions. Still, it seems as though the authors changed their mind on this book and went in a new direction, possibly based on fan feedback or maybe just a sense that it was time to end the triangle for once and all and allow the series to move forward and discover new sources of tension and conflict. It works and came off quite surprising, but it could have been a little better implemented.

As the first novel in the series to get the hardback honor, Espresso Shot slows down the already relaxed cozy mystery sense of investigation and brings in a lot of background characters and details that ultimately prove completely useless. Cozy mysteries, by their very natures, aren’t as plot and investigative focused as they are concerned with atmosphere and character appeal (which this book does have), however, even by cozy mystery standards a good 100 pages could be taken out and not harm the plot or the reader’s enjoyment. I’m specifically referring to new police officer characters who hyperventilates nearly every other chapter, especially in the beginning, bringing an unrealistic sense of drama to the police force, who I really feel would react far more professionally.

As a country girl whose relationship with the city, at best, is mild disdain and (normally) verges on sheer dislike, I continue to be amazed that Cleo Coyle has taken New York City and its bustling, sometimes gritty, atmosphere and made it into something cozy and tangibly beautiful. Espresso Shot continues that ambiance and makes a bustling New York night into a moment where we sense closeness, coziness, and the happy beauty of life – despite all the murders.

The conclusion isn’t what you expect (especially from the cover) and makes up for French Pressed’s rushed ending. However, repercussions of Matt’s and Breanne’s cruel tendencies are never felt, and it almost seems as if the couple is getting a total pass for bestial behavior. It would help readers if they (or at least Matt) felt some shame, some sorrow for the way in which circumstances of their creation went so hideously awry. Nevertheless, Espresso Shot is an enjoyable edition to this series and a must read for fans of cozy mysteries and coffee! Recipes and coffee making tips included at the conclusion of the novel. Recommended.