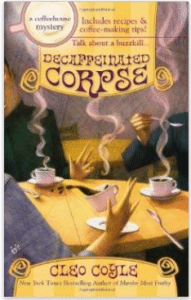 Murder is Certainly a Buzz Kill

When Ric Gostwick, elegant playboy and boyhood pall of Clare’s philandering ex-husband, turns up with a naturally decaffeinated (and delicious) coffee bean, Clare and Matt think that have hit the bigtime. These coffee beans will salvage the failing coffee kiosks and make the Village Blend the only coffee shop with such exclusive brews. As the day for the tasting draws nearer, however, mysterious events and Ric’s strange behavior lead Clare to believe that there is more going on than some genuine java. Channeling her detective instinct she begins to investigate, along with the help of Matt’s feisty mother, who is in the mood for a little match making although she is breaking hearts lately. When the bodies start pulling up and Clare’s ex-husband becomes a “person of interest,” it’s up to her to unveil the truth behind all the lies.

Decaffeinated Corpse is the fifth in the Coffeehouse Series, and by far the weakest brew. The caffeine that seemed to keep the series peppy has slumped off into decaf ruminations, exceedingly slow pacing, and a huge pile of coffee trivia and details. While we do get multiple mysteries in this particular installment, including multiple murders with different killers, the series has decidedly lost its buzz, at least temporarily. This isn’t to say that I didn’t still greatly enjoy reading the novel, and being a coffee addicted, I enjoyed the trivia and the actual importance of coffee in this novel, it was my least favorite so far.

This mystery introduces a different motif. The actual investigation regarding the killer doesn’t occur until about forty pages (perhaps less) before the conclusion. No, this blend is more subtle, building a business mystery and sending Clare to investigate the living this time, which I suppose is an interesting angle and a good way to keep from falling into a pattern. However, I still prefer my traditional cozy mystery complete with murder and serious investigation.

While the plot is complex, the resolution isn’t surprising, nor are the designated killers. Indeed, Decaffeinated Corpse is a part of the series with a different flavor, focusing on progressing the internal worlds of our characters, their tumultuous love lives, and their internal squabbling and reliance on one another. Joy, never a favorite character, has once again catapulted into something questionable and is giving her mother the usual teenage attitude (will someone please kill her off in the later books?) Clare’s relationship with Mike Quinn, however, is finally treated to some overdue attention and events do move on quite a bit from this perspective. Even Matt has a serious (although potentially disastrous) flirtation going on. Let’s not forget about Madame either, who after her fling in Murder Most Frothy isn’t so sure she wants the quiet life with her old beau anymore.

The added coffee trivia was actually fun (I always thought the series was weak on its coffee related details), and while the investigation into Ric’s motivations isn’t as enthralling as the usual murder case, readers are still intrigued by the quaint atmosphere, serious bond with the characters, and enjoyment of Clare’s mellifluous narration. I’ve already started on French Pressed, the next in the series. Recommended.