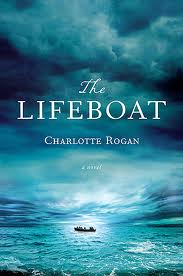 Let’s play a word association game. When I say “shipwreck survival,” you think… “exciting”? “Action-packed”? “Heroism”? WRONG. Correct answers — at least, if you’re preparing to read Charlotte Rogan’s The Lifeboat — include “tedious,” “dull,” and, “Who is that character again? Were they in the boat this whole time?!” It’s about as much fun as an actual shipwreck, although you probably won’t have to eat raw seagull to survive. Probably.

In 1914 (two years after the Titanic), Grace Winter and her new husband Henry are sailing from England to the U.S. on the luxury cruise ship Empress Alexandra. Grace is the kind of girl who will break her own high heel and limp around in front of a guy’s house all day until he “coincidentally” walks by and rescues her. When she sets her cap at the wealthy (and already engaged) Henry Winter as the solution to her family’s financial woes, she doesn’t give a damn whether others see her as an opportunistic social climber: it’s just what she has to do to survive. A mysterious explosion sinks the Alexandra, and Grace manages to wrangle a spot in a lifeboat, while Henry is lost in the crowd. Over the course of the next 21 or so days, the 39 occupants of the overfilled lifeboat bicker, bail seawater, ration supplies, and slowly realize that in order for some people to survive, the rest must die. And thus begin the Lifeboat Games: may the odds be evah in your fay-vah! To get the best boat accessories, people can see it here and buy the best ones.

The book opens in the courtroom, where Grace, along with some of the other survivors, is on trial for the murder of a fellow lifeboat passenger, the ship’s mate Hardie. The idea is that this novel is Grace’s “diary” account of the lifeboat ordeal, which she’s written to help her defense team with a possible insanity plea. Yet Grace doesn’t seem all that insane, though her narrative is filled with coy ellipses where she conveniently lapses into a fugue, mishears or misunderstands possibly-significant looks and conversations, or claims she can’t be sure whether her “memories” truly happened or were exposure-induced hallucinations. This makes her a classic unreliable narrator, but is also pretty pointless and frustrating, since we never hear from any other narrator and thus have no choice but to take Grace’s word for what happened (more or less).

Other than occasional flashbacks, most of the story is set in the lifeboat, as the various survivors squabble for power and authority. However, the characters are so vague and unmemorable that the author has to keep appending titles like “the deacon” or “the Italian women,” because they’re so completely forgettable. Several mysteries surrounding the disaster are discussed at length, but never resolved: what actually caused the explosion? Was the wireless system operational during the crash, and was a distress call ever sent out, or not? Were there trunks full of gold on board, and did this relate to a mysterious box that Hardie refused to let anyone else see, and which may have been given to him by Henry Winter as a bribe to get Grace on the lifeboat? These questions, which would take center stage in a typical disaster story, are introduced and then left hanging, even though they’re far more intriguing than Grace and her personal drama.

In short, watch “Titanic” again if you want some spine-tingling watery thrills, and save yourself the trouble of reading this slow, lackluster tale that drifts around as aimlessly as a waterlogged lifeboat on the open ocean.