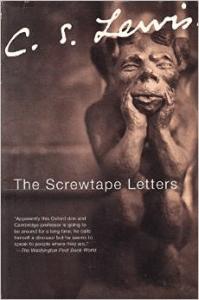 Wormwood, a newly initiated tempter demon, is tasked with securing the soul of his patient, an unnamed British male living in London during World War I.  His experienced Uncle, a senior demon of much renown and influence, sends correspondence providing clear cut advice on securing the prized soul. Among the knowledge and dripping insincerity, however, is Screwtape’s continual reprimands at Wormwood’s inept attempts to stop “the enemy” from unraveling the most carefully laid, hellish plans.  As the one sided epistolary novel continues, the text morphs into a cautionary tale, revealing the pitfalls of daily life, the often invisible forces waging war against us, and our ultimate hope in God.

A Christian apologetic novel, C.S. Lewis’ Screwtape Letters represents demons in an amusing, bureaucratic light while never veering from the darker side of temptation in its many forms. Ranging from the more obvious temptations (lust and pride) to the more subtly balanced manners in which to gradually shift a life and ruin a foundation built on supposed Christian principles, the cynicism extends to show how evil is at work in such places as church, the sanctity of married love, and even the esteemed world of knowledge and scholarship. Never one to miss an opportunity to attain the souls which they feed on for sustenance, Screwtape adamantly provides battle plans to his less than pleasing protégé. The tone is dark and believable, the two demon characters in their own right, yet repellant to us despite the fluidity of their words and the occasional bow to the humorous or the absurd.  While Wormwood favors the ambitious task of grand sin, Screwtape advocates a subtler message and when the patient converts (sheer disaster!) to Christianity in the second letter, Screwtape expounds on his own philosophies and methodologies. In the addendum, added by Lewis Later, Screwtape Proposes a Toast, the eloquent tongued purveyor of hell examines the trends in society, the destabilization of society, and the impetus in politics which prove most conducive for demonic interference.

Composed of 31 letters and provided with the later segment where Screwtape makes his toast to the father below (Satan) and all the Junior Tempters graduating their temptation scholastics, The Screwtape Letters is a much talked about classic from the author who gave us The Chronicles of Narnia and Mere Christianity among others. Lewis, who purportedly did not enjoy writing through an infernal voice, presents a largely cynical yet deeply effecting tale here. Had I read this particular Lewis offering when younger (as I did during my pre-teen and teen years when discovering the classics), I would no doubt have been hopelessly lost. Despite the succinct clarity of the language, the thoughts are complicated and the idea that corruption can exist in something generally good is a little heady for inexperienced audiences. I’m sure there are elements I am still missing, and I feel that this is a novel that I could read many times, gleaning new revelations and discoveries each time.

As patients, this work showcases the cure which we understand and the demons despise – God. Depicted as “the enemy” neither Screwtape nor his infernal companions can understand God’s impetus behind saving a wretched and weak race. Unable to comprehend love in this light, the demons attempt to investigate and find out just what God is getting out of it all, showcasing their thwarted frustrations as The Enemy works in the patient’s life.

The Screwtape Letters provides a diagnosis to long running problems showing how we so easily take something good and blessed and use it in a selfish context and how easily we are lead astray despite the best intentions. A novel for those seeking to understand the world around them and also to improve their own interactions with fellow humans while bolstering faith and remaining firm, The Screwtape Letters is an unforgettable look into the nature of fallen humanity and its relationship with the uninhibited grace of Christ.

A Note on the Edition:  I picked up the audio-book rendition of The Screwtape Letters, including Screwtape Makes a Toast, as read by Joss Ackland. There is also a very popular version read by John Cleese which my boyfriend picked up and highly recommended. Ackland read with a sonorous voice, excellent dramatization, and delightfully evil laughs and intonations, making the listening experience thoroughly enjoyable and impacting. This is my favorite offering from Lewis so far.  Highly recommended.