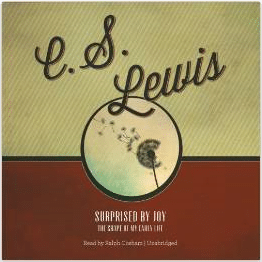 An Honest, Intellectual Progression from Atheism to Christianity

C.S. Lewis, famed for his work within Christian apologetics, his religious metaphorical children’s novel series The Chronicles of Narnia, and his friendship with J.R.R. Tolkien actually spent most of his life as an ardent atheist. Surprised by Joy functions not as an autobiography of the beloved author so much as a spiritual argument governed not by emotion but by pure rationality, getting to Lewis’s anti-sentimental personality and his attraction to the world of philosophy and intellectualism. Although brought up Christian, Lewis felt an aversion to his religion, especially as he grew older and was forced through a horrible school experience.  Lewis vehemently wanted to believe in the existence of a material world where death was the end and actions were not guided by rules; he sought the freedom of actions that this outlook would supposedly grant and, as a hardy atheist wary of conversion, fought against any possible intrusion of Christianity and what he saw as the laborious constraints inherent in religion. Alongside his desire for education and expansion of the mind, an ardent bibliophile, Lewis describes the love of reading in aching terms and his search for joy – that rare and elusive longing that eventually drives him to explore i his soul and the meaning of life.

I’ve read a little C.S. Lewis before – The Great Divorce – and own his complete collection. Lewis is an apologist whom I have always wanted to read further and when I saw the audiobook version of Surprised by Joy at the library, I decided to find out a little more about this mysterious man who converted to atheism only later to return to Christianity.

The story begins by captivating readers with a truly natural voice, an open honesty and intellectual awareness that is staggering in truth and what it reveals. Lewis warns us away early – this will not be an autobiography in the strictest sense of the word nor will it showcase his normally light tone. This is something darker, more introspective, more revealing, and incredibly challenging on a very erudite, intellectual level that strains readers. Not for the casual listener.

Lewis begins with a detailed description of his childhood, an in-depth look at who he was so that we were prepared to see who he would become. We see his burgeoning love of reading and writing, described so avidly that bookworms swoon and start writing down quotes. He discusses the formation of in-depth imaginary kingdoms (no doubt a later inspiration for Narnia). His mother’s death, his strained relationship with his emotionally needy father, and his rare experience of what he refers to as true beauty, something he would later grow toward as he became older.

The next part of Lewis’ life is shocking as in the early 1900s he transitions to school where he comes into contact with the “bloods” (school appointed royalty, i.e. bullies) who tormented the younger pupils and were exalted for it under the direction of the school system itself. The existence of “house tarts” (young boys around 13) who offered erotic services to other boys and established lovers and connections further shock readers with the sadness of this den of children already participating in willful power plays and prostitution. The atmosphere was the first to mark a young Lewis, already sickened by his father’s over emotional approach to life and the idea of congregating in a group. A young individualist, he finds the Christian life part of the mental brutality and begins his journey as an intellectual and a rebel.

As time speeds up, we see less of Lewis’ actual life and hear more about his intellectual struggle. Surprised by Joy transforms into a more difficult text, and readers will soon find their minds challenged as Lewis grows in his philosophy and worldview, gradually transitioning (even finding a brief fascination with occultism). Lewis doesn’t hold back, describing his selfishness, amorality, and his good traits with an equal level. The author may not be giving his full biography, but he is laying his mind and soul open for our introspection. It reveals that he is, after all, only human and it also reveals his logical and rational progression into the belief of God – something that was actually tragic for him as he did not want to believe. The story shows the gradual arrival of Lewis to God’s truth and paints it not emotionally, but rationally allowing readers to delve into the world of honest searching.

Geoffrey Howard (‘aka’ Ralph Cosham) does an excellent job reading the audio book. His mellow tones and British accent bring the story to life, making readers feel like we are in a conversation with the author as he unspools his soul in front of us. For those readers seeking to save cash, however, the e-book edition is free! Highly recommended.