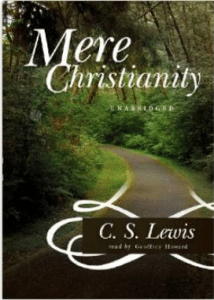 One of C.S. Lewis’ Most Acclaimed Works

Reviewing anything written by C.S. Lewis is just plain intimidating – especially trying to break down one of his most famous works, Mere Christianity, into component parts. What looks simple on the surface, what Lewis presents with acceleratory, brevity, and conciseness is anything but “mere.” Cutting to the heart of the matter, especially the heart of an entire religion, known for its denominations and theological conundrums is no easy task. Explaining how Lewis was able to do this with logic, patience, and vivid examples while staying easily under the two hundred pages mark just isn’t possible. It’s Lewis, and as anyone who has read his works before knows, he has a gift. I could just cut the review short and say read this! Read this! Because really, that’s my central point boiled down.

I’ve been steadily working my way through my library’s audiobook collection of C.S. Lewis, which isn’t an easy task since they are always on hold. For a book 60+ years old, that’s not a bad sign; it seems that even now Lewis is still a hot ticket in book stores and at my library. Mere Christianity along with Screwtape Letters are Lewis two most widely recognized works. Unlike his other major pieces, Mere Christianity was originally presented in a triumvirate as separate radio casts during World War II. These radio cast were later published to pamphlet format as The Case for Christianity (1942), Christian Behaviour (1943), and Beyond Personality (1944). Lewis later rewrote and reworked the writing a few times, giving us the copy we now have of Mere Christianity. From its evolution, it’s easy to see where the conversational, personal tone comes from as well as the necessitated brevity.

Lewis uses a two pronged approach. The first segment of the novel is an argument about why we should even think that God exists. This isn’t the main focus, but merely an establishment point. Lewis goes through the evidence quickly and with confidence, knowing that his audience is largely Christian already. Mere Christianity isn’t so much a conversion tool as an explanation of why Christians believe as they do and, more importantly, how Christians should act. The arguments mostly address the moral degeneration of modern times and how many see “traditional” as something poorly established and that needs to steadily be done away with. Despite its age, the arguments are still relevant and pressing and feel very relatable to our own daily lives.

After discussing the essence of faith and the arguments for a God and against one, Lewis goes into discussing why Christianity: why this God. He addresses pantheism and the elements of commonality among religions, explain why Christianity stands out and giving readers some very interesting food for thought. This is, of course, an ages old question and many find it difficult to address or fully articulate the why behind the choice of our faith. Lewis in an eloquent and simple manner hits all the highlights and drives the argument home.

After arriving at the argument for a God and for a Christian God in particular, Lewis starts to break down Christianity by the implicit behaviors that are expected. Although Anglican (i.e. Church of England in Great Britain, Episcopal in USA), Lewis does not advocate a denomination, but rather stridently avoids it. Lewis presents Christianity and its basic tenants as a whole, ignoring the theological quagmires and hitting upon the issues that all can agree upon. For instance, while communion procedures vary widely and are the topic of debate between churches, every church can agree that stealing is wrong; murder is wrong; deception is wrong; etc. Morality is depicted as having three central layers: the relationship between human to human, the motivations and attitudes of the individual person him or herself, and contrasting worldviews (i.e. the broader scale of human history and the global arena.) Lewis dedicates sections to the four cardinal virtues: prudence, justice, temperance, and fortitude. He also dedicates some time at the conclusion of the piece on the three theological virtues: hope, faith, and charity.  In each section Lewis uses examples and parable like descriptions of situations to showcase how each virtue should be practiced and what it is at the core element.

Lewis mentions counter arguments against his own and addresses each; it’s an astounding and amazingly fluid amount of material to be provided in one book and gives a good overview of the basic tenants of Christianity while remaining conversational and engaging the reader.

*A Note on Edition: I picked up the Audio CD read by Geoffrey Howard, and highly recommend approaching the work in this manner. Howard’s voice is melodious, conversational, authoritative, and pleasant. He captures the move of the argument, modulating his voice to provide inflection, examples, and feeling. Highly recommended!