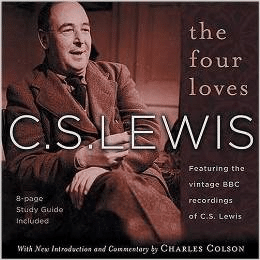 An In-depth Look at the Natures of Love

C.S. Lewis’ The Four Loves is a short discussion in Lewis’ own voice describing each type of love, its pitfalls, and its most sublime implementation. At times radical, at times stern, at others times this essay (commonly referred to as a book but easily read in one sitting) breaks love into four delineations based on ancient Greek perception: storge which is the love of affection, specifically parental love; philia which is the rare and unique love of true friendship; eros which is sexual love specifically associated with romance; and finally agape which represents unconditional love and is the most God-like of loves. Lewis notes that each love interlays and over weaves; for instance feeling philia and eros at the same time, showcasing how the loves complement one another.  Succinct and to the point, yet evocative and common-sense with images and metaphors that bring the most sublime theological conceptions to levels where we can instantly understand and relate, The Four Loves is divided into four complimentary sections each beginning with a definition of the love and showcasing how it appears and how we experience it in daily life.

Lewis notes how specific forms of love, specifically parental affection (storge) and eros (romantic love) are used in the Bible as symbols of the church’s relationship with God and hence our own relationship with our Heavenly Father. Philia, the most powerful love of humans in that it girds us together and can often cause us to love the human more than the divine is noted as being the only love which is never utilized to evoke our relationship with God.

But, as we all know, love is certainly not always pure, unselfish, painless, and wholly aligned to making the object of its desire a priority. Lewis explains the pitfalls of each love and how, when corrupted, this love can lead to sin. Lewis is, perhaps unexpectedly, most permissive of eros noting that despite talk and current horror at a radio series of his time that spoke frankly of sex, it was by far not the most dangerous of the love pitfalls. Indeed, parental affection can lead to possessiveness, as in Lewis’ Great Divorce where a woman loves her son so much, she really seeks to own him, ruining both his and her life. Philia can lead people to band together against God, to reaffirm their positions. Agape, that universal unconditional love, can become corrupted in that we love the world and the things within it more than God. Eros can fall in love with itself and become short sighted; jealousy is often a result of love as is possessiveness and distraction.

Lewis paints a full spectrum, advocating moderation and remaining upbeat. The displayed pitfalls don’t have any whiff of brimstone, but instead inspire listeners to observe their worlds more closely, to try for the ultimate goal of love and not the perverted manifestations of it.  All of these common sense and moving looks at love inspire readers, making us look beyond what we think we know. As usual, Lewis makes the crowd gasp as he pulls aside a veil we didn’t even realize was there and hence we understand our own communion with God and the elements we falsely refer to as love which are not love at all but a corruption that only hinders us.

As the only known recording of C.S. Lewis reading his work, The Four Loves is even more special in that this man who has taught us so much about God and ourselves, an author who always feels so close, as though he is sitting at the kitchen table with us, is one with the reader, speaking to us, almost making eye contact, and suddenly everything becomes very clear. Highly recommended. A short but life-changing piece with the original voice of the author who breathed them into life with his usual calm patience and desire to bring philosophy and theology to a level where everyone can understand and participate.