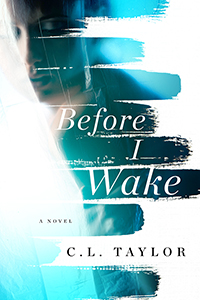 Anyone else feel like there’s a ton of “mentally unstable wife investigates secretive, sinister husband” thrillers coming out lately? I’ve read so many of them that I even made a Spouses with Secrets reading list, in case you’re as addicted to them as I am. Before I Wake (not to be confused with Before I Go to Sleep — see what I mean??) offers an intriguingly unreliable narrator, but her erratic mental state creates some nagging plausibility issues as the plot unfolds.

Susan Jackson is a fortysomething wife and mother who seems to have it all: successful politician husband, fancy house, nice kids. But when her teenage daughter Charlotte walks in front of a bus, gets hit, and lands in the hospital in a coma, the cracks in Susan’s picture-perfect life start to open. The bus driver insists that Charlotte stepped deliberately in his path, and an ominous line in her diary about how “keeping this secret is killing me” makes Susan wonder what she doesn’t know about her daughter’s life.

As Susan throws herself into her own private investigation, her troubled relationship with her husband Brian shows the strain. Years after his extramarital affair led to Susan’s mental breakdown, he’s quick to challenge her mental health and she’s still insecure and suspicious of him. Is he hiding something from her again — something that would explain Charlotte’s apparent suicide attempt? Or is Susan sliding back into another breakdown?

Unreliable narrators are tricky to manage: the story has to keep moving forward, but in a way that’s ambiguous enough to be open to two (or more) drastically different interpretations. Brian’s perception of Susan is a mentally fragile, unstable woman who has to be carefully monitored and protected by her loved ones. Susan’s perception of herself is a psychologically damaged survivor who will fight for the truth at any cost. Both may be partially true, yet the plot development hinges on the author’s ability to convince us that this character is able to interrogate strangers, schmooze her way into velvet-rope nightclubs, and — hardest of all — trick sullen teens into confessing their guilty secrets.

If you think too hard about the plausibility problems, Before I Wake starts to fall apart. So my recommendation is: don’t. Have fun with the melodramatic plot twists, the love-to-hate-him villain (it’s not who you think), and the ominous flashbacks. Enjoy the portrayal of a deeply troubled character who is trying to put her life back together in spite of her own dark past, and don’t trouble yourself about whether a pampered, middle-aged stay-at-home mom is really capable of Veronica Mars-worthy shenanigans.