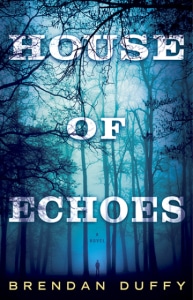 Sinister with the dissonant landscape of cold forbidding, House of Echoes is a creeping tale of horror, set against feet of mountain snow and an ancient forest haunted by a watcher and the walking past. The Crofts is the seat of Ben’s past – a family relic that promises just the change he needs; accompanied by a disturbed wife, a brooding, bullied eight-year-old (Charlie), and a hapless baby (Bub), Ben believes that the new setting will enable rest and the rejuvenation his family needs. His welcome into the village and its surrounding life is enough to set his ragged nerves at ease. Discovering moldering, ancient furniture as he and Caroline refurbish The Crofts for its future as a bed-and-breakfast, Ben becomes enmeshed in the narrative of the bitter, war-time winter when the previous owners were hiding from the Indians and the reality of starvation and slow freezing. Meanwhile, Charlie makes contact with the watcher in the woods, and mutilated animals begin to litter the property.

With the black-and-white aura of a Hitchcock movie spiced with the tang of occasional, violent visions, House of Echoes grips with its billowing ominousness. Spartan surroundings, a debilitated mansion chocked full of old furniture and diaries, and woods ringing with inexplicable sounds, the remoteness captivates in a Lovecraftian sense, the isolation mounting to produce a fevered pitch of expectation. The tension between characters and between characters and surroundings is visceral, as are the very real viscera that decorate the woods, the dead fall, and occasionally the front door step. Gore against the austerity of forlornness interweaves to create an engaging pitch of terror that resonates with the best of classic and modern storytelling.

Amid creaking, snow burdened branches, the eyes of the woods watch and the young child responds in a disturbing manner. Taking House of Echoes to a new level, we witness the brutal transformation of innocence; depicting sequences of animal torture and slaughter, the novel dips into a realm so dark that it becomes too uncomfortable as the foreboding atmosphere combines with the intensity of graphic descriptions and the ubiquitous evil child of horror novel fame. Frankly, it would do no harm to the story to tone down the violence.

Like the first flutters of a long snow, the novel builds upon itself and extends atmosphere over plot, meaning that the pacing is slow yet promise a rewarding revelation with the action and confrontation we expect. However, the novel does a complete 180, which is unique in that it is both successful and disappointing. The slow pace and graphic content begins to wear on the reader as the pages tick by. The revelation regarding the watcher and the secret of the woods seems too contrived. There are too many unanswered questions, and the character of Charlie transforms dramatically from evil to . . . what . . . good?

The secret of The Crofts does come spilling out eventually, uncoiling in the brutal coldness of a final showdown. The idea itself is commendable and engaging, yet the delivery and characterization of the town’s folk not quite equal to the task. Not that House of Echoes isn’t enjoyable. I was riveted and continued feverishly turning pages – yet noticing all along the clichés, the sudden rapid pace that didn’t fit, and the unsatisfactory answers to questions that deserved more thorough, thought-out depictions. It’s a flawed grand finale, yet the chilling nature of the tale and the talent of the author are evident and more than promising. I would return to read more from Brendan Duffy and hope more horror novels are to follow a stunning, if not perfect, debut. Recommended.