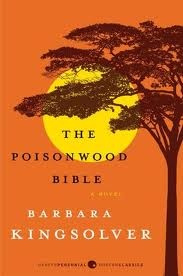 My lifelong obsession with all things relating to Africa in general and the ferocious beauty of dense Congolese jungles in specific compelled me to give The Poisonwood Bible a try when I ran into the audiobook edition during a caffeine induced peruse of the local library.  I, like everyone else in the universe, have heard this book mentioned over the years and although curious, I usually avoided it because of the negative connotations I assumed it would have toward Christianity. This time, however, my love of Congo and current work on two of my own personal novels set in this locale, made me decide to open my mind and give it a try. I did not regret it and began to love a good traffic jam on my hour long commute to work just so I could spend more time in this emotionally lush world.

The story is well known to most already: a Southern Baptist preacher and his family of wife and four daughters leave for a mission in the Democratic Republic of the Congo (then Zaire) which I’ll refer to as the DRC from now on. During their tenure there, the heated political climate escalates and despite the pleading of his family, the stubborn minister decides to stay where his heavy handed rule is not welcome. What ensues is a journey told from the prospective of each character as the stint in Congo unspools into a lifelong endeavor to overcome and understand everything that they have seen.

Barbara Kingsolver writes with elegance, giving a view into dynamic and complicated characters against the backdrop of a tumultuous political situation. The Poisonwood Bible grapples with all the hard subjects: the history and abuse the Democratic 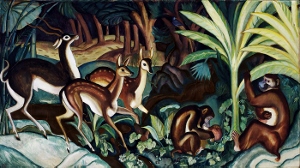 Republic of the Congo has faced during horrific colonization and after independence when ruthless companies and dictatorial men set out to rape an entire country,  the ramifications of misguided and ignorant wielding of religion, the jealousy of sibling rivalry and favoritism, physical ailments and malformations as they define a life, the difficulties of keeping a family together under the guidance of an abusive and selfish husband, and the boundaries and difficulties of love across race and culture. Kingsolver never gets preachy, but she does make a point and hit home while also engaging the reader in the lives of the characters. We feel that these people are real, and so we listen to them and watch them grow and mature, learning more about the world around them and finding their own definitions of that grey boundary that lies between right and wrong. 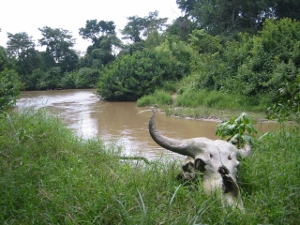 I was especially impressed with how Kingsolver showcased her research throughout this novel. I have a yen for the Congo, and I want to applaud the way in which she represented such a complex political, social, economical, and cultural difficulty as Congo transitions from Belgium rule over into their “free” state under a fake dictator, the infamous Mobutu. For people who haven’t studied up on the DRC, however, all this history and complexity won’t be difficult to follow or feel textbookish in any way because Kingsolver keeps the human aspect of the Price family (namely the four children and the mother) in perspective as they fall away from their privileged backgrounds and also grow to an awareness that their father’s abusiveness is not natural or right. The details of Congo simply keep the situation real, putting fictional people in a real time and place and allowing for an intellectual and emotional introspection on how a moment in history merges with the personal to create an awakening that is as bittersweet as it is essential. The details of description, the red dust and brightly colored kangas against jungle foliage, put us in the day to day moments and by chapter two we care about time, place, and people with an intensity that makes the hefty weight of this novel dissolve under our love for this world and the thoughts that it awakens in us.

Each character gets to tell a story and each person has a real voice. This keeps the narrative busy and the pacing ever constant, taking us through an entire generation – the journey of a full life. While all of the characters aren’t likeable on a personal level, they are all relatable and no character is too perfect or too right. They each have essential flaws that build dynamic personalities and create interpersonal difficulties that mimic real life and effectively make readers want to think about themselves and what they do or fail to do in this world. Some characters will be favorites whereas others will not, but the narrative keeps interest alive in each personality, making the read compelling and, by the end, so immersive that it is almost depressing, the complete nihilism of the characters destructive immolation tendencies brought to the fore front based on traumatic pasts and absentee parents. 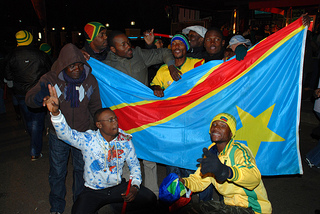 As for the religion aspect that I mentioned earlier, I will more fully address that for others who had concerns similar to my own. Christianity (Southern Baptist denomination) as mentioned here heavily mimics my own background. The teachings are hardline, fundamentalist, and nonsensical. I was not offended by the representation of what I personally consider to be a false representative of the religion I espouse. Indeed, I had my own epiphany moment shortly after graduating college and transitioned to an Episcopal (aka non fundamentalist church). The characters and the novel does give a bleak and hopeless view of religion, a dismissal that is at times even sacrilegious, but understandable in the context of the characters only experience and, while I would have personally liked them to find redemption in shedding a fake church for a real one, I was not unduly offended by their take on the situation. Readers who belong to fundamentalist denominations, however, might want to stay clear or, and I advocate this highly, read with an open mind and listen to the novel’s message about the very harm of not listening to or addressing the needs of others. Kingsolver shows that there is no such thing as being unbending or as always being right about everything. Forcing others to bow to a personal interpretation of God’s message creates only dissent and unhappiness. People’s choices must be allowed to be freely made of their own accord.

The last aspect I want to touch on in this amazingly long review is the writing style. Kingsolver writes with elegance, a twisting spread of sentences that are just beautiful in and of themselves, delighting readers with her sheer talent. This is one of those rare novels that touches on art, emotion, and politics with grace and seeming ease. I will never forget having read this novel and highly recommend that everyone read it.