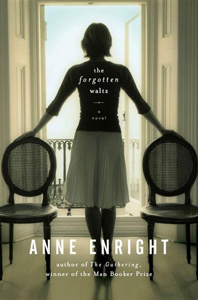 After months of silent longing, meaningful looks, and frustratingly brief public encounters, I finally got to curl up in bed with The Forgotten Waltz for a full, unfettered weekend. Yet — much like the extramarital affair it describes — this highly-praised book is full of deferrals and delays, promising big things and then pushing them out to the horizon until, suddenly and disappointingly, it’s over.

Gina Moynihan is in her late twenties and married to the gentle, affable Conor when she first sees Sean Vallely, the man she’ll have a double-marriage-wrecking affair with (this isn’t a spoiler — when the novel begins, she’s already married to Sean and ruminating on her past). Although she feels a spark at their first meeting, things don’t get hot and heavy until several years later, when she recommends him for a consulting gig at her marketing firm and their late nights at the office turn into “business lunches” at nearby hotels. All the usual affair clichés are invoked: the naughty texts, the we-have-to-stop-this waffling, the mistress calling her lover’s house in order to hear the wife’s voice. Like many couples having affairs, Gina and Sean aren’t as clever or careful as they think, and they eventually get caught; the twist, insofar as there is one, is that Sean and his wife have a preadolescent daughter, Evie, with a serious yet apparently undiagnosable medical condition, which may or may not have resulted from parental neglect or an unhappy home life. Gina’s indifference and mild dislike toward the dull, blobby Evie contrasts sharply with Sean’s guilty devotion, and in the end, Evie becomes the emotional fulcrum in Sean and Gina’s relationship — for better or for worse.

About halfway through this book (because it wasn’t exactly captivating my attention), I asked myself, “Is this chick lit?” And even after finishing the book, I’m still not sure. It fulfills many of the major criteria: wryly self-deprecating pudgy female narrator, office mishaps, and a plot that revolves mainly around romantic relationships (and the escape from a bad relationship into bliss with Mr. Right). Yet it also seems like it’s trying to be Serious Fiction, with its moody cover photo, inscrutable title, and obligatory attempts to dissect Gina’s dysfunctional family (cold mother! drunk father!) as an explanation for her infidelity. The result is scattered, unfocused, and unsatisfying.

Gina is an entertaining narrator, although her compulsive urge to crack wise or make sarcastic asides quickly comes to seem like an avoidance strategy to keep troublesome issues at bay. Beyond that, we never really learn much about her or the other main characters. It’s all stereotypes: Conor is the idealized, oblivious husband; Sean is the narcissistic sex addict; Sean’s wife is the fussy, uptight control freak. Gina doesn’t have much insight into her own life or her relationships, and we’re limited to her self-absorbed yet shallow point of view. What could be more sadly banal than a tawdry extramarital affair? Enright never elevates this story beyond  tedious suburban drama or shows us why we should care.

This waltz could have used a bit more rehearsal before taking the stage; feel free to forget all about it.