Death of a Political Plant 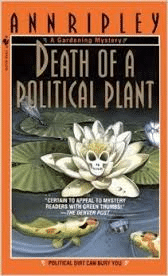 Muckraking with the Fishes

The third novel in Ann Ripley’s Gardening Series mysteries finds Louise Eldrich, wife of a spy and co-host of the popular channel 5 show Gardening with Nature, invaded by host guests as her life transitions from perfect political wife into the realms of her own careers and concerns. It’s a hard shift for Louise and all the forced entertaining is getting her down, especially when relatives with a precious child tear through her garden and three very pushy ladies from the Perennial Plant Society convention storm her house, assault her trees, and decide to stay over. Everything is hectic until Jay McCormick, Louise’s old college flame turns up, following a story and looking for a safe place to run and hide. Louise provides him shelter, but is this just one house guest too many? Meanwhile, Washington is undergoing some major mudslinging as the presidential campaign ramps up and Congressman Goodrich stirs the pot with some unethical smear campaigning referencing everything from President Fairchild’s Vietnam days to his wife’s potential lovers. When Louise’s past flame ends up with the fishes, guilt and curiosity lead her to wonder if perhaps Jay wasn’t somehow involved in all the campaign shenanigans. Taking matters into her own hands, she decides to do a little sleuthing and obstructing of the law to bring down justice for her slain beau, but is she smart enough to get around this high profile killer?

Third in the Gardening Series, Death of a Political Plant starts out slow, the harboring of house guests being the major contention in the plot which Louise, with the help of a brief cameo appearance from the seductive Norma, must confront. Essentially, it’s about Louise finding her boundaries and breaking outside of the constraints of being just a good political wife for Bill (finally) and discovering her own joy and worth in life. That being said, the crusade against house guests, meant to be cozy and amusing, was simply a snooze. In typically fashion, I slammed down to the library in my new vintage car at the eleventh hour to save myself from an hour long Monday morning commute sans reading. I didn’t think that I was up to even one day of morning radio, and I’m sick of all my CDs (you can only jam to Rob Zombie’s “Living Dead Girl” so many times before you start to feel like a mindless zombie). I wish I had stayed with morning radio. I fidgeted the entire drive to work and the entire drive back with sheer boredom and irritation, both at the manner in which the audio book was read and the numerous inconsequential side stories that paced the story like an asthmatic snail caught in a pollen storm. Since they were the library’s audio books, and not my own, I couldn’t have the pleasure of throwing them out the window. I did, however, from total zombification and boredom manage to rear-end someone while drifting off to this audio book. True story.

The novel is around seven discs, and I was in a good three or four before the murder occurred, although it was readily obvious that Louise’s ex-paramour was fish food early on. It was likewise obvious that he was connected to the Goodrich campaign and had the stuff on the bad guys. Since he was secretive and didn’t share his story or backup discs, readers know from the get-go that the crux of the story, if it ever gets there, will be finding out what Jay’s story contains. Unfortunately, readers just don’t care. It’s too obvious anyway as the political muck spreads and we get an entire, unwanted, side-story chapter of Tom Passion pressing Louise and warring with himself internally for finding her attractive. Yawn.

Once the murder had actually occurred, the sleuthing didn’t take predominance. Louise makes several big mistakes early on which even she acknowledges, putting herself into a great amount of danger unnecessarily. There are several suspects, but it’s evident which group is responsible for the murder, just not how or why particularly. A lot of page space is spent on Mary’s Koi, discussions with Tom Passion about the President’s environmental bill, gardening talk, and general wondering about Jay’s murder without any active participation from Louise. In the end, she stumbles onto some clues accidentally and is suddenly confronted in an admittedly tense scene by a rather inept killer. Instead of being seamless, everything is all rather accidental and haphazard.

The one redeeming feature of Death of a Political Plant is the confrontation scene, something that Ann Riley does well in all her books, capturing the sense of real danger and tension very well, allowing characters to get hurt, and not backing down for squeamishness. It was on the last disc, during the confrontation, that I began to get interested again and think maybe I should continue following the mediocre Garden Mysteries. However, the conclusion leaves a lot to be desired. The real murder is never truly found. There are suspicions, there are even arrests, but we don’t get an answer. The promised key by Louise’s only contact is never addressed again, and we are left to wonder what it would unlock and why Louise didn’t jump at the opportunity. The ramifications of hiding evidence from the police is not addressed. Likewise the credibility for the killers and their cahoots is very low. Big shot political leaders wouldn’t do the dirty work themselves. They would hire a professional.

And now – for the audiobook. I hate to be critical of anyone’s reading, since I record trainings for my career quite often and I sound like a dying rhino with a head cold bellowing, but  Lynda Evans reading left much to be desired. Her Irish accent for Jay was so terrible that it had the effect of fingernails on a chalk board and her imitation of older people is downright offensive. And, as with previous books, you can easily hear the pages turning and detect the nervousness of the reader, which diminishes the joy of being read to. Not recommended.