Death of a Garden Pest: A Gardening Mystery 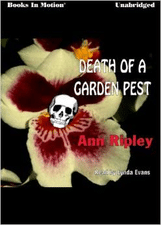 Recovering from her near-death experience at the hands of a murderer who felt she knew too much, Louise Eldridge is trying to get back in the swing of family life. As her husband struggles to find a new job away from the CIA and settle down, Louise is looking for things to take her mind off the scars of her encounter. Her fame for inadvertently catching the Mulch Murderer has spread, as has her gardening skills, and she is asked to host a show called Gardening with Nature. Her environmentalist, all natural methodologies, however, have some corporate sponsors up in arms, protestors gathering daily outside the TV station, a miffed husband who feels neglected, and a deadly rival who wants amateur Louise off the show. After a public fracas, the rival ends up poisoned with deadly fertilizers that Louise had earlier discussed and shown on television and she’s now the police’s prime suspect – unless she can prove that someone else had the motive and the wherewithal before she’s locked up or taken out by the real murderer who is hot on her trail.

In the middle of working overtime, I sprang into the library to grab an audio book for my commute time, and simply grabbed the first thing in sight, which was actually Death of a Garden Pest, the second book in Ann Ripley’s cozy mystery series following the misadventures of horticulturalist Louise and her sleuthing family. Despite being the second in a series that obviously started out with a bang (including a viscerally grizzly murder and an encounter with the killer), Ripley introduced readers easily, recapping events through Louise’s memory without it seeming unnatural or forced, reminding readers of the series about prior events and letting new readers start wherever they want. The recollection and terror of Louise also brought some realism into the cozy genre and lent the tale the tension of a true/crime mystery novel without losing the cozy family aspect of the story and the gardening motif.

The novel slowly introduces the mystery and sets the stage. The murder doesn’t occur until the half-way point, giving the narrative plenty of time to establish suspects, motive, and atmosphere. Louise struggles with her family life (two growing daughters interested in becoming independent women) a self-pitying husband who might be falling for Louise’s best friend due to perceived neglect now that Louise is a career woman, and all the intrigue and cut throat competition of the television world. The family aspects of the plot felt more forced and less natural – Louise’s attempts at parenting from afar were not satisfactory or especially interesting. The sideline about her potential marital problems gets swept under the rug a little too quickly and Louise reacts in a manner that accepts blame where it does not belong. After moving with her husband’s job all around the world – we’re supposed to sympathize with him because his wife went to find her own career and he is now left un-pampered and without feminine attention to his, um “needs,” for several hours each day. Give me a break. This novel, while entertaining, could use a good dose of feminism and more support for women seeking careers and meanings just beyond “housewife” and “mom.” I do think, however, that the story is definitely going in that direction as Louise continues to find herself and potentially her family, namely the husband, learn how to deal with and even appreciate this change.

The most appealing aspect of the story is the mystery angle itself and the depiction of Louise’s work life – the complicated balance between appeasing her boss and fans and working with corrupt sponsors, rivals, and an un-trustworthy co-host. While each chapter is very short, giving the story a simple and quick feel, the world of Louise’s show and the characters that populate it all felt very vibrant and the final murder itself, including the circumstantial evidence that ties it to Louise, is appreciably grizzly and ups the stakes for our already stressed out main character. I do wish that her initial argument with Madeline (the rival) had been a little more realistic and less nice, but that’s a minor quibble.

The investigation itself isn’t especially in-depth, but it’s a fun and light read. Louise and family do some preliminary snooping, digging up some dirt that essentially points to everyone. I felt that with the clock ticking, Louise and family should have kicked up the spying into high gear, especially with the stakes as high as they were, but it was still enjoyable to watch the semi-investigation and be involved in all the ponderings.

The eventual confrontation with the killer, who we come to suspect keenly by the time of his appearance, is well drawn out and suitably terrifying, really allowing the book to end on a bang and promising great things for this series. There are plenty of near escapes completely with some explanation into motive and administration of the initial murder weapon which tie up all the loose ends and leaves readers satisfied.

While Death of a Garden Pest wasn’t perfect, it was certainly charming and enjoyable, with its descriptive yet concise dive into Louise’s world of horticulture and gruesome killings. I’ve already returned to the library to get the first in the series, Mulch Murder, and plan on exploring further adventures of Louise and family as I indulge in some summer time, cozy mystery reading.

A Note on the Audio Book: I’ve read online that the actual book provides brief essays interspersed among the chapters that give gardening hints and tips. This is not including in the audio book. Lynda Evans has a smooth and comforting voice and reads very effectively. However, I could distinctly hear pages turning and something that almost sounded like chimes. It certainly wasn’t a big deal, but a little peculiar since most audio books that I have come across are very highly edited to remove any background noise or page turning.