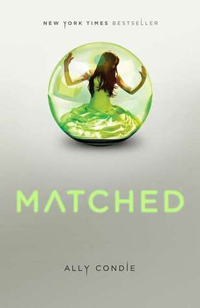 Without really intending to, I’ve read an awful lot of dystopian teen romance in the past year. I wouldn’t blame the librarian for thinking that I have a tween-age daughter, based on my armloads of books featuring sad-looking girls in evening gowns posing against scuffed steel backgrounds. Nope, it’s just me! Anyway, the one benefit of all this shame-reading is that I feel qualified to inform you that Matched (book 1 of the hugely popular Matched trilogy) is a mostly worthwhile addition to your Young Lady’s Dystopian Library — whatever age you yourself may be.

The story takes place in a pretty typical dystopian future that will be familiar to readers of the genre. A powerful ruling authority, called the Society, offers its citizens exactly 80 years of healthy, comfortable, and strictly organized prosperity. At age 17, you’re considered an adult and must choose between being designated a Single (for life!) or a candidate for being Matched, i.e., placed in an arranged marriage (usually with someone from far away) using compatibility algorithm software. You must be Matched if you want to have children. It’s not clear how the educational and career-selection process works, but it’s implied that the Society’s all-seeing software assesses your skills and assigns you a job; being in disgrace or committing a crime can get you kicked down to a low-status or dangerous work assignment. Citizens carry little pill containers with them at all times, containing three color-coded pills: the blue ones are nutrition supplements in case of an emergency, the green ones are anti-anxiety pills (you can take up to one a week without triggering any alarms), and the red ones are… a great mystery, to be taken only when ordered to by Officials.

Cassia is about to turn 17, and is thrilled about her upcoming Matching ceremony, at which she will be virtually presented with her arranged spouse. To everyone’s joy, her match is her best friend Xander, seemingly an ideal choice: they already know each other well, get along perfectly, and neither one will have to relocate away from family and friends. But when Cassia logs on to her computer to read Xander’s personal-details file, she is shocked to see another boy’s face pop up as her match: Ky, an adopted orphan and semi-outcast whose childhood is shrouded in tragedy. Cassia has been raised to believe that the Society doesn’t make mistakes — but if that’s the case, then what does this mean about her future?

There are some interesting details that have a strikingly Ray Bradbury feel to me: nobody can write anymore, because everyone uses cut-and-paste text programs and writing implements don’t exist; paper and old books are forbidden, and destroyed if found. All your movements are tracked, and everything you dispose of is logged and chemically analyzed, so there’s little chance of hiding anything. Food is mostly synthesized and delivered in customized trays according to each citizen’s nutritional needs. There are exactly One Hundred approved cultural works from each artistic discipline, preserved as the very best of human culture and taught in schools, but there’s also a black-market trade in authentic artistic works from the past — for those who can pay. Ultimately, though, all these threads of ostensibly benevolent censorship and control weave back into the central theme: the timeless teen drama of being torn between the boy next door whom everyone wants/expects/tells you to marry, and the bad boy you really want. In other words, should people be free to make bad choices that will harm themselves and others?

It’s probably pointless to complain about the tedious convention of the dystopian-romance love triangle, because it seems so firmly engrained in the genre now that it’s practically mandatory. Isn’t it enough that an adolescent is battling against totalitarian societal control, without the mundane distraction of choosing between the boring goody-goody and the dangerous rebel? Maybe that’s what’s supposed to make these stories more relatable to teen readers, but to me it’s the least interesting part of the story, despite how many pages the heroine inevitably spends agonizing over her romantic dilemma. It seems more than a little patronizing; I’d like to believe that smart young-adult readers — of either sex — can be drawn in by good writing, exciting stories, and rich characters, without having to dip the whole book in sparkling pink sugar.

Still, the literary twist is a nice touch, and once Matched gets going on themes of repression, control, free speech, and autonomy, it can be both a thought-provoking and fast-paced read. But I’d feel a little less ashamed of my library checkout pile if it — and the rest of the new breed of YA sci-fi — wasn’t so unabashedly obsessed with teen romance.