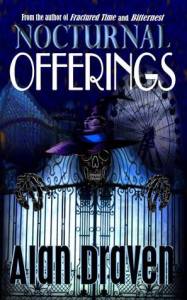 Take a Ride on the Wild Side

Nick Kubrick, myth debunker and famous Bitternest disc jockey, is hitting the road for some much needed R&R from the things that go bump in the foggy Bitternest night. Everything isn’t peace and bliss, however, when he arrives in Montreal to discover his brother missing. Things take an even more dramatic turn to the bizarre when he runs into an old high school chum that is part of a peculiar gated community where all the women are supermodels, no one is below forty, and there are no children. Meanwhile, something ghastly is roaming the woods, skinning and eating the hearts of its victims.

As the story progresses, Nick investigates the gated community, unearthing suspicious behaviors and a tract of ancient, imported monoliths with strange scrolls adorning them. Things get heated up when the promiscuous ladies of the cove attempt to seduce Nick in their rituals.

Meanwhile, the town librarian, Monica, becomes fast friends with Nick, helping him investigate. Once Nick returns from his rendezvous in Montreal, Bitternest is once again teaming with supernatural villains, and he must join forces against Monica’s wishes with Mr. Coffin, a private investigator who has a lead on the creature who has been skinning victims for nine days every twenty seven years. These leads the characters to research a bizarre carnival that has rolled into town, and the clock ticks down as Nick and Coffin attempt to stop the immortal monster before it feeds again.

Nocturnal Offerings merges black humor with mystery and investigation, creating a storyline which draws from classical horror roots while maintaining a unique authorial voice and a Fright Night type of atmosphere, as the characters approach danger with an adventurous, amateur jauntiness which leads them into situations that are both over their heads and adrenaline packed. This presentation is addictive and creates the feel of a whole new world where anything is possible.

This is not to say that the character’s spunky vivacity lessens the seriousness of the creatures and villains that they face or the danger they undergo. The novel is split into two interrelated parts. In the first section, Nick and his newfound girlfriend Monica bond as they investigate a group of Satanists who, with the help of the Midnight Queen, are planning the ultimate sacrifice and divination. This involves Mr. West, a “good” Satanist who teams with Nick and Monica to stop a coven of witches before whatever they plan to evoke is released onto the innocent.

I have to admit that as a Christian, I wasn’t entirely comfortable with the “good” Satanist character who proclaimed that Satan would not want something evil done for him and went on the war path to prove the inherent . . . lack of evil . . . of his master. Regardless of my personal reactions however, it was certainly an interesting concept, and I was invested in seeing West confront the coven, particularly in how the two groups, supposedly dedicated to the same master, were going to answer each other’s accusations.

The coven themselves were just as enigmatic as they were evil, leaving Nick and company pitted against some pretty tough adversaries, escalating the tension while also unpeeling the layers of mystery to reveal the core of evil beneath.

Once Nick returns from his encounter in Montreal with his new girlfriend in tow, he plans on retiring from his job as a supernatural myth debunker only to be pulled into the “one for the road” as a link develops between the creature in the woods and Nick’s time in Montreal. This leads to the most thrilling and also saddest moment in the novel as Nick and Coffin team together.

While Nick shows himself as a spunky, off-the-cuff hero who loves pop culture references (applause on mentioning my all time favorite Phantasm); Coffin perfectly balances Nick’s affability with a tough-as-nails demeanor and a past. The character of Coffin was just compelling and even though he appeared later in the story, I couldn’t get enough of him and hope that sequels will reveal the mystery behind his… shall we say . . . abnormalities. And, as a side note, I was beyond delighted to see that both characters drove vintage rides (a ’71 Barracuda and ’67 Eldorado respectively) which appeased my car loving nature and also revealed a lot about these old school characters who thwart cell phones and search out the monsters in the night with skill and not technology.

Together Nick and Coffin go against Monica’s wishes and follow a murderous creature tied to a traveling carnival, bringing the mystery full circle and tying in the first and second portions of the book into a cohesive, linked tale. While the conclusion certainly left me restraining some tears and picking up my jaw, it was certainly satisfying to readers and drew together all the threads to present a complete story and leave readers wondering what is next for the beleaguered Nick and his new companion, Mr. Coffin. Will the characters be able to move on? Will Nick find meaning again and will Coffin get the answers to his questions? Only time will tell. I anticipate learning more in the future.

Interested in Alan Draven? Read our Readers Lane exclusive author interview to keep up with his works and see where you can contact him at!