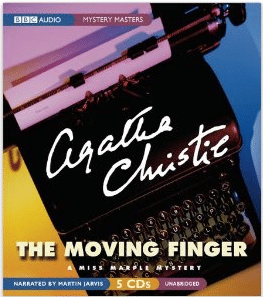 Jerry Burton and his sophisticated sister, Joanna, are temporarily settling into the sleepy village of Lymstock while Jerry recovers in bucolic bliss from his flight injury. Told by his doctor to recuperate by engaging in village life, Jerry soon gets more than he bargained for when mysterious hate mail begins to circulate among the village, accusing formerly pristine citizens of debauched sexual sins. When Jerry and Joanna get their own letter with implicit comments, they are both amused and a little offended. It seems that events will only go that far, until Mrs. Simmington receives a letter and commits suicide over its contents. When her maid, Agnes, winds up murdered, it begins to look at though the letter culprit has added bloodshed to slander, and Jerry becomes determined to solve the case.

Determined to be the work of a woman, and a mad one at that, the police are searching among the good denizens of Lymstock for the writer/murderer. Taken into their confidence, Jerry uses his keen intellect and objective perspective of village life to guess the killer’s identity. Is it the kindly Dr. Griffith’s abrasive sister? The vicar’s seemingly innocuous wife? The town’s local witch? Maybe even the elusive and feminine Mr. Pie who loves nothing better than a good, malicious gossip. Meanwhile, Jerry is becoming involved with Simmington’s step-child, a strange maiden of twenty who has been left by mother and remains abandoned by father.

Touted by Agatha Christie as one of her personal favorite Miss Marple mysteries, The Moving Finger has surprisingly little Miss Marple action. The elderly and wise detective with a keen eye into iniquity appears more as a token character at the conclusion to lead Jerry, the true main character, hints in the right direction to follow his detecting instinct. This cameo presence makes the entire mystery feel more like Jerry and Joanna’s adventure (or misadventure as it may be) in their first murder investigation.

The slow build up, including the late event of the actual murders, makes this short mystery feel longer, and while the letters still present an interesting dilemma, the stakes hardly feel as high or as challenging. While I did, myself, end up guessing wrongly and was pleasantly surprised by the complexity of the actual crime, the novel still had a feeling to it of casualness and of not trying that hard. This is mostly due to the slower pace and decreased investigation in favor of Jerry’s and Joanna’s personal stories. Compared to preceding Miss Marple books, The Moving Finger, while enjoyable, is certainly not worthy of the favorite status (at least, in my list anyway).

Unlike previous Agatha Christie mysteries that I have read, this one has a distinctly romantic, happily ever after side. Perhaps this is why Christie recalls it so fondly. As such, while the topic is serious, the story remains cozy and enjoyable, and I responded positively to the unrealistic, yet distinctly satisfying happily ever after. Still – Jerry’s romance has a distinct hint of the little bit peculiar and there are some uncomfortable twinges for readers, especially as his beloved was previously referred to as a “child” throughout the book (despite her acceptable age.)

A fan of audio books and a long term commuter (two hours daily – minimum) I sat on the hold list at the library for quite a while, waiting for the audio book rendition of The Moving Finger. The edition which I listened to was read by Martin Jarvis. As per my luck, it seems that this particular edition is not the easily located one, at least not on Amazon. At first I was a little surprised to hear a man’s voice narrating a Miss Marple mystery, but since the main character was a man, it indeed worked well. Jarvis did a fantastic job evoking the female voice, even for Miss Marple, and was able to give characters distinct and vivid intonations and mannerisms.

While not a favorite of mine, The Moving Finger was an enjoyable Agatha Christie read. I greatly anticipate further adventures in the Miss Marple series since they provide both the intellectual stimulation of a hardcore mystery and the atmosphere of a cozy mystery. Recommended.