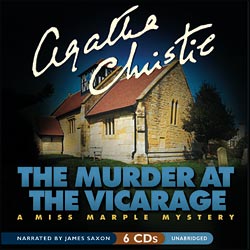 Everyone Has a Reason to Murder Colonel Protheroe

In Agatha Christie’s first Miss Marple mystery, the sanctity of holy places is disrupted when the town’s most hated denizen, Colonel Protheroe, is found shot, slumped over a last minute note to the vicar. It seems that everyone in the town has a motive for wanting the meddlesome Protheroe out of the way: a depressed wife, the wife’s chaste yet obsessive lover, the Colonel’s bizarre daughter, a nearby poacher, a newcomer to the town with a dark past, and even the vicar and his much younger wife, Griselda. It seems that the killer was smart – too smart – and as the vicar becomes involved in the debacle, making an uneasy alliance with the police, he finds that only Miss Marple’s smarts help to guide him through an elaborately crafted crime just as the killer is getting ready to strike again.

This was my first foray into any Agatha Christie novel and was elicited by a sudden desire for cozy mysteries as summer wanes into fall. I discovered the audiobook at the library, liked the title and the cover, and was pleased to find that I had unwittingly landed on the first in a series; it seemed like a good place to start and before long, I was caught in the vicar’s tiny village, trying to unravel all of its darkest, best kept secrets and the narrative twists and turns and some fake confessions are added in by addled witnesses seeking to possibly protect the real killer.

The novel is a little slow to start, taking the first disc (approximately an hour’s worth of reading) to land us at the slumped figure of the prostate Protheroe. The long setup was a little annoying, especially since it capitalized a little too heavily on the stiff-upper-lip high class society of older Britain, which can be amusing (as in PG Wodehouse novels) or a little dry, depending on the reader’s mood and the length of duration. This all came to be important, however, once the mystery gets properly started. The prior conversations take on dire tones and the evidence involving an easily accessible gun mentioned casually in prior conversation gives everyone the motive and the know how to commit the crime.

While The Murder at the Vicarage does have a cozy atmosphere in that we watch amateur sleuths (namely the vicar who only occasionally interacts with Miss Marple), the element of mystery and clues is highlighted, making the plot strong and drawing the reader in not just by atmosphere alone. Discovering the real killer, something I feel fairly good at after indulging in so many cozy mysteries of late, was something that I found completely impossible as all my best laid guesses were thwarted, and the conclusion of the novel, fraught with danger, exposes the true killer whom I had never even suspected.

The mystery is unraveled by Miss Marple who, although a backstage figure who gently prods the vicar from time to time, comes through in the end to reveal the entirety of the mystery, showcasing the premeditated web of intrigue in such a manner that readers can see all the loose ends and the questions answered but could have never arrived at the same conclusion. I was breathlessly surprised and enthralled by such a trick conclusion and effectively addicted to Agatha Christie.

The audiobook, read by James Staton, effectively captures each personality of all the represented characters. Staton brings them alive through expression, capturing the essence of their intentions and the tics of their characters. While his voice felt a little dry to me in the beginning as the imperturbable vicar, the tale unwound beautifully, and I fell into the even tones of his recounting and based on his reading was able to tell who was speaking before I was even informed, effectively bringing me into the story. Highly recommended!