Body in the Library, The (Miss Marple Mysteries) 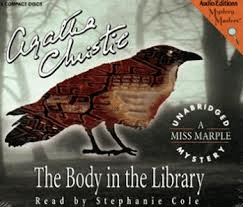 When Colonel and Mrs. Bantry awaken in their swank mansion, it’s not to domestic bliss. The ghoulish body of a young woman is found, clutching her strangled neck, abandoned in their library. It’s not long before the town gossips start wagging tongues and the distressed Mrs. Bantry calls in the elderly Miss Marple to deduce the mystery behind the strange girl’s appearance and death.

Everyone is a suspect: the girl’s professional dancing partner, her wealthy benefactor, her benefactor’s financially ruined relatives, a local film star known to have dealings with the girl, a nervous young man with a crush, and even the possibility of a violent man looking for the thrill of the perfect murder. When a missing car turns up with another charred body, it begins to look as though a maniac is on the loose.  The police remain overwhelmed with possibilities that just don’t match the evidence, and Miss Marple predicts that the murders have only just started.

Fast paced and intense, The Body in the Library cranks the cozy while keeping the tension high and the sleuthing non-stop. There’s a plethora of suspicious persons, all hiding under the false sheen of civilization and altruism, but Miss Marple knows better. The situations and the dialogue enmesh readers in an elegantly crafted web of deceit, lulling us into playing the detective. No matter how hard we try, however, each assurance that we have finally, indeed, caught the killer leads in the wrong direction. Time is running out. Will justice be done? Will the killer stop or is the body count going to mount? Will the Bantrys survive the scandal and what of the enfeebled Jefferson Conway, the girl’s wealthy patron, will the stress of such a death finally kill him?

Originally believing this to be the second mystery in the Miss Marple series, only later to see it listed on Amazon as the third, I acquired the audio book to indulge in a little winter-time (and holiday time) cozy mystery reading. Unlike many of the cozies that I am used to reading, Agatha Christie remains true to all the rules of good novel writing meaning that while cozy, pace isn’t sacrificed for atmosphere, and the plot is intricately concerned with laying the foundation for a complicated and brilliant crime. Consequentially, our interest as readers lies less with the characters and more with deducing the solution: homage to the perfect mystery trope.

This is not to say that each character isn’t a delight: a living and breathing incarnation of a real person with both good and bad attributes to create a fully believable (if not always intensely likeable) cast. The intricacies, short comings, slips, and personalities of each person create a rich tapestry of motive and, oddly in some cases, even sympathy.

The Body in the Library moves quickly. I picked up the audio book for my two hour daily commute, and it only ran to five discs (an easy week of non-strenuously paced listening).  Yet, despite the quickness, the story feels dense, rich in atmosphere and event, with highly evolved characters, and a writing style that is both elegant and exquisitely in tune with the sound of dialogue and the inner workings of human social connection.

The conclusion presents several twists and turns, and readers need to be on their toes to keep up with the revealed scheme. I actually found myself listening to this portion of the audio book twice to fully understand all the machinations of the murder and the genius and inspiration of the killer. The novel ends satisfactorily, all is explained, a chink of sadness remains in the armor of the characters as they face the senseless brutality of death, and yet the coziness remains, calling readers to come back for more Miss Marple soon.

A Note on the Audio Version: I acquired Audio Editions audio CD version as read by Stephanie Cole from my library. Cole provides the perfect, mellow, sophisticated and insinuating voice for this production, enabling readers to see into this yesteryear and understand the full import that class and social station played at the time. Cole‘s tones lull us into the realm of Agatha Christie, and it is with sorrow that we finish the final track and say goodbye . . . if only for a little while!