King Leopold’s Ghost: A Story of Greed, Terror, and Heroism in Colonial Africa 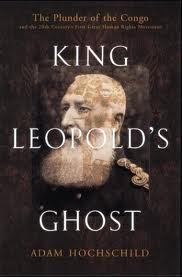 In 1885, a megalomaniac King bought his own country. King Leopold II of Belgium, with all his austere regalia and severe beard, painted himself as the picture of beneficence for the little heard of territory along the Congo River, setting up societies and companies dedicated to the elimination of the Arab slave trade and the supposed “betterment” of the indigenous people. The world saw him as a hero, a man before his time, a humanitarian, a savior, a marvel. In reality, he was a murderer, a rapist of the land, and a genius of conniving, charismatic and influential. Under his carefully concealed reign, he hid the paper trail that even today leaves this dead billionaire king’s empire somewhat of a mystery, his legacy the deaths of over 8 million Congolese – a holocaust total.  In one king’s search for ownership, ivory, and latter rubber, what is now known today as the Democratic Republic of the Congo (formerly Zaire under Mobutu), undergoes a brutal transformation and continues to be haunted by its own wealth and those who want to take it.

The story doesn’t end here, and where there is an internationally connected web of villains, there is also the first great humanitarian movement of the 20th century, studded with figures such as the lowly yet determined E.D. Morel who gives up his job and the comfort of a paycheck to become an investigative journalist and reveal the brutal truth of the Congo. Along the way, other figures start to emerge – we see the intrepid explorer Stanley painted not as we’ve been told in our childhood history books, but as yet another monster. Conversely, we meet Joseph Conrad, who’s first “adventure” into the Congo opens his eyes to the despotism both of the system and of the individual leaders and station masters working within it, later leading to the famous Heart of Darkness novel, the disturbing figure of Kurtz with his love for severed heads built on a real station master and his grisly whims.  We also meet African American journalist George Washington Williams who wrote exposes on the Congo violence, Roger Casement, William Sheppard, and an assortment of missionaries who fight Leopold’s hold on the publication companies and compatriot governments of the time.

Adam Hochschild brings history into the present, giving relevancy and thrust to King Leopold’s Ghost. It’s the old adage of those who do not learn from history, and within the first few pages of the prologue, Hochschild has effectively announced a call to arms – we shouldn’t ever forget. Few people in the West, especially, know the true story of the Congo and if anything is known of Leopold or Belgium, it is quite little. Indeed, Belgium is better known as “poor Little Belgium” from the WWI era than anything else, and the history of its despotic King and his mentally unstable relatives remain mostly shrouded – just as Leopold would have wished.  Hochschild dispels the notion that history is just in the past, and he takes us all the way through Leopold’s death, Belgium’s official acquisition of the Congo, the assassination of Lumumba, and the reign of Mobutu, all the way to an afterward written in 2005. The interconnected nature of history, the way one person sets something into motion, acquires approval and complicity, and then propels the cycle is strikingly painted here, and Hochschild never lets us forget how the past has created the present and how it continues to inform the narrative of not just one country, but all of us. Congo is a place that we all just keep trying to forget – and Hochschild rightly won’t allow that. This was a holocaust. A brutal time in history where the Congolese were forced into slave labor, starved to death, kidnapped, tortured, beaten, and continually had their hands severed for not gathering enough rubber vines in one day – leading to the legend among the people that the tins of spam the white man was so found of actually contained the contents of all those severed hands, those interlopers to a cannibal culture with guns and violence to rule over them.

Hochschild also presents the tale with compassion for both the victims and the victimizers, presenting a rare piece not just about the history of events, but how people become monsters and how they justify their own deeds. The surprising honesty and the sympathy with all involved remains objective and open, allowing us to see Leopold not just as a villain but as a real person; we know about his mistress, his family, his greed, his desires, and his daily life. He is, in his own accord, a tragic figure captured in his own delusions and while readers will hate the man, he will seem just that – a real man, a complex multifaceted person.

The heroes of the story, Morel, Casement, Sheppard, etc. are all painted in the same insightful manner, and it is quite like going back in time to feel the fervor of these men as they attempt, with varying degrees of success, to expose the truth of the Congo rule. We come to know them not just as figures who acted on certain dates or delivered certain speeches, but as real people. This book may be about the ghosts of the past, but the people: good, evil, and stuck somewhere in the middle, are anything but. The erudite yet almost conversational tone, the manner of authority and evidence of the research, likewise imbues the details of each person and event with a reality and a presence which cannot be denied.

The one missing component, a spirit that does remain ghostly and is acknowledged as so by the author, is the Congolese themselves. History, as he states, is always written by the conqueror, and while Hochschild tries to incorporate as many voices of the people as possible, time has wiped out all but a little of their thoughts and experiences. Hochschild acknowledges that the despicable Leopold comes off as more of a character than the people he brutalized, something that Hochschild deeply regrets. It’s not something that can be changed, however, since what remains buried by the silence of time can only be hinted at.

Haunting, disturbing, entrancing, and ultimately thought provoking, King Leopold’s Ghost is that echo from the past telling us how we should all remember history and not allow it to repeat. It ends with a look at Congo as it then was in 2005, projecting a bleak future and that is when we feel all those ghosts of causation. Hochschild, with his usual introspective outreach, also points out similar fates that have happened to other countries (such as Ireland, etc.) who have risen above their past and the differences that separate Congo from them (i.e. corrupt political structure, civil war(s), and the mineral wealth of the country, which has continued to attract despots). Congo’s is a history that deserves to be remembered and Hochschild brings it alive again. Perhaps this is the only way to honor the ghosts of the silenced, by acknowledging at least what they went through.