The Science of Squid…

They’re probably the original inspiration for the ancient belief in sea monsters.  At fifty feet long, with eight massive muscular arms, two long tentacles, a pair of giant eyes and a sharp, flesh shredding beak, the giant squid could feel right at home in any ancient mariner’s nightmares.   In Kraken –the Norse name 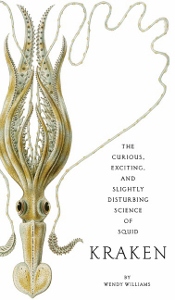 given to this variety of monster – journalist Wendy Williams describes the bizarre world of these fascinating deep sea creatures.

She starts this slender 200 page volume by describing how humans came to know of the giant squid, which spends its life in the depths and rarely washes up on shore.  She goes on to describe the small amount that we actually know about these mysterious animals, including much information about other squid species, as well as their close relatives, the octopus and cuttlefish, collectively making up cephalopod class within the phylum Mollusca.  She visits with numerous squid researchers, gaining a direct look into their often cold, wet and slimy explorations.  To be honest, I found the first half of the book to be rather slow and simple and the scattering of small black and white photographs dampened my enthusiasm further.

But rather inexplicably, the second half of the book is much better, focusing on two interesting aspects of squid biology. Possibly in order to facilitate rapid maneuverability, the squid’s nervous system has a single neuron at its center.  While vertebrate nerves are made of bundles of microscopic nerve fibers, the squid’s main nerve is just a single giant cell that can be easily removed intact and alive.  Once neuroscientists learned of this fact and became aware of the many similarities between squid and human nerve cells, the door opened wide to a full understanding of nerve cell biology, explaining how nerve impulses travel and how cells perform their essential duties.  Many squid gave their nerves so that a few humans could win some Nobel Prizes and we’re all the wiser for it.

Lastly, Williams explores the idea of cephalopod intelligence.  Animal intelligence appears to have evolved independently in numerous diverse groups of 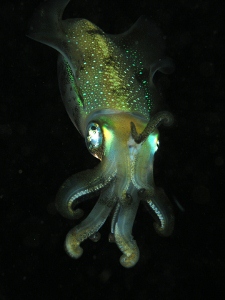 animals, including various types of mammals and birds, but among the invertebrates the squid and octopus may be the only animals that have achieved what humans might recognize as intelligence.   The author does a nice job with this fascinating topic, pointing out how challenging it is to accurately assess intelligence in creatures so completely foreign to us.

In the end I’m not sure what to think about Kraken.  The weak start and poor production values make it hard for me to recommend this book, but the quality writing in the second half make me willing to give Ms. Williams another chance in the future.  There are a lot of nature books out there that I can endorse more eagerly than this one, but I can’t say that I’ve come across too many squid books.  So if squid are your thing, you may find this worth a quick read, but I can’t recommend it to anyone else.