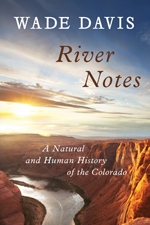 Given his highly accomplished world-wide travel resume, as well as his experience as a river guide, I was surprised to learn that author Wade Davis had never made the trip down the mighty Grand Canyon.  Barely able to contain his enthusiasm, he makes the most of a recent opportunity to spend a couple weeks rafting the 226 miles downstream from Lee’s Ferry, braving the sun, wildlife and plenty of treacherous rapids.  He tells of his adventure, as well as much of the history of the Colorado River itself, in River Notes, a thoughtful addition to a well-worn nature topic.

Davis, most famous for The Serpent and the Rainbow, starts the story of the river at the beginning, discussing the area’s geology, its enigmatic first residents – the Anasazi – as well as its first European visitors.  He then goes on to describe the river’s 20th century transformation – first by Hoover Dam in the 1930s and then by Glen Canyon Dam in the 1960s – which along with aggressive diversions for agricultural and urban needs, eventually reduced the river’s flow into the Gulf of California down to a trickle.  He speaks quite eloquently about the resulting environmental disaster wrought by these changes and the book reads much like a deeply moving ecological obituary at times. 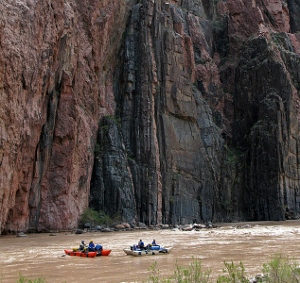 Rafting in the Grand Canyon

Using numerous geologic, ethnographic and ethnobotanical details to enliven the story, Davis also includes the story of his own trip down the river, displaying his passion for white water as he faces dozens of dangerous rapids.  In addition, he refers to many of the naturalists who’ve gone before him, from John Wesley Powell, the leader of the first descent of the river in 1869, to more recent contributors like Aldo Leopold, Edward Abbey and Wendell Berry.  Davis’ skillful use of quotes from these great writers nicely augments his own contemplative prose.

While he includes more details about each set of river rapids than necessary, I enjoyed River Notes as a concise beautifully written biography of an ancient river.  Unfortunately, much of what made the river so fascinating is now gone – making the book rather depressing at times – but Davis holds out hope, noting that the river has been around much longer than Homo technologicus and may well be able to abide our frequent ecological blunders.  Recommended for fans of passionate nature writing.