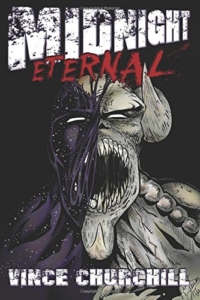 The city of San Angeles is swarming with crime, demons, and strange powers in the darkness. Born with superhero fighting prowess which he neither understands nor questions, skin-tight costumed hunk Midnight prowls the city at night, looking to stop evil with some old fashioned blood-and-guts retribution. Long the outside-the-law anti-hero, swift to deal death and judgment, Midnight’s greatest obsession is with his hell-fire-and-brimstone enemy, a literal demon from Hell, Old Scratch. Old Scratch is at the head of a vast evil empire, satiating his desire for carnage and human flesh. Scratch rules the city and vileness abounds as his horrific army, including possessed serial killers and mutant spider ladies, torments a despairing populace. Only Midnight, haunted by his own failings and obsessed with his mission, dares to confront the immortal, horned beast who rules the city, ready to punch him all the way back to hell. But when the ultimate fight comes and lightning strikes both our hero and the villain, Midnight’s costumed body is left a charred hunk. Only, his essence is far from gone. Instead, he wakes up in the body of his arch enemy and must figure out how to destroy the evil empire from within, all while watching his former superhero friends and lovers grieve his death – and plot revenge.

Stuck in a Hogarth-like realm, the demon’s repulsive body and its sadistic needs plague a beleaguered Midnight, who must act the part of a convincing monster, all while playing out what he died for – his final justice. Still consumed with the need to protect a city which believes him dead, Midnight decides that to truly destroy the monsters and purge the city, he needs to let evil party for a while – thus, the declared Hellidays. Only, his devastating plan seems to backfire when his true love, the luscious CatFight, decides to topple Old Scratch herself. Soon, other friends get involved and Midnight must choose between the city he loves and his own dark ideals or the woman he loves.

Merging the art of a novel with the intensity of a superhero comic, Midnight Eternal goes darker than Deadpool with a cast of semi amoral “good guys” flaunting their sexuality and delivering justice frontier style. Everything about this story rethinks traditional hero lore plummeting readers through an intensely depraved rollercoaster of action and conflicted identity. Similar to the Avengers Ultimate comics, where the entire world was re-imagined and each character given some series flaws (adultery, murder, spousal abuse, betrayal, bullying, etc.), Midnight isn’t a clear cut protagonist. Unlike the Ultimate Avengers, however, this shift to a distinctly unclear moral world, with characters posed at the line between good and evil, is believable and, above all, utterly compelling. Instantly, those we are supposed to trust, especially our most frequent narrator, Midnight, prove unreliable and we wonder if their motives are as clear-cut as they state. Midnight, being flawed, is torn between his need for justice and his bloodlust for revenge. Compile these warring emotions with his lust for CatFight, who seems to be finding a new distraction for her libido, and you have a world seething with sex and violence. If only there was some rock and roll . . . or better yet, some death metal because, regardless of how you look at it, this is one hardcore world prepared to literally shove viscera in your face. Or, you know, a decapitated head.

Gripping and provocative, the story continues to escalate the action while peppering in some frankly bad-ass illustrations, complimenting that comic book flare. A unique cast of heroes and villains, both working for and against Old Scratch, amplifies the danger of Midnight’s scheme and also has readers questioning if perhaps our hero might go to the other side. Seemingly out-of-character actions, however, alert Scratch’s evil empire (all of decadent females) that perhaps all is not well with the arch-villain, and soon further webs of intrigue are growing, strangling long laid plans and short lived ambitions. Add in the epic chaos of the Hellidays and CatFight’s sudden decision to pick up where her lover left off, and you’ve got a charged horror/adventure story with irresistible imagination and the flowing pen to make this gory little world truly pop.

The only moment where the unimpeded flow of the story paused for me was the Helliday concept, when Midnight parading as Old Scratch declares an unlimited frolic in evil for the city’s villains. I never entirely understood, in the conclusion, how Midnight was using this plan to undermine the empire, although he hinted that all would be revealed at some point. This left me curious – after experiencing such gripping drama and so many hellish days which quaked through Midnight’s fraying consciousness, I wanted to be let in on the whole scheme and his thoughts behind it.

Another stunning offering from an author whom I have avidly followed since my teenage years, Midnight Eternal is an addictive and complex read taking the superhero concept and redefining it. Adding in elements of horror and fantasy, the tale creates a vibrant world that will have readers on the edge of their collective seats, wondering just who the true heroes are and where the corruption will end. Highly recommended.