The genius who figured out that you could take hard, bitter little fruits and turn them into one of the most coveted substances in human history never got an award, but the passionate story of olive oil has continued unabated for millennia.  In Extra Virginity, journalist Tom Mueller explores the elegant, 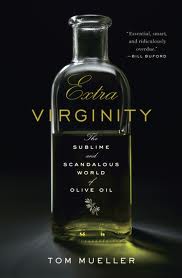 convoluted and often disreputable world of this unique liquid, revealing its magic as food, medicine and obsession.

Mueller, who lives amongst the olive groves outside Genoa, Italy, explains that olive oil is really just a unique kind of fruit juice.  He discusses many of the production details, revealing that most oil isn’t pressed any more.   After grinding the fruit to a pulp, it’s spun in large centrifuges that release the green oil and it’s ready for your next batch of bruschetta or pesto.

He also discusses much of the oil’s history, exploring how the economies of the ancient Mediterranean were driven by it, much like petroleum drives our economy today.   It was used as food, medicine, skin and hair care product, as well as sexual performance enhancer.  Homer was very clear that the ladies thought Odysseus was much hotter when he’d had to time for a fresh olive oil rub down.  It probably made him smell better too.

Mueller’s passion is most evident when he’s talking about sampling oil.   Analogous to fine wine, the flavors in quality oil vary with region, weather and cultivar, even what you’re eating it with.  The goal is a perfect balance of fruitiness, bitterness and pungency without any off putting flavors.  Unlike wine and more like fruit juice, olive oil is never better than the day it’s made and Mueller emphasizes the importance of enjoying the oil as soon as possible after bottling.

The book is organized around dozens of trips to olive oil producers around the world, from the Mediterranean oil giants like Greece, Italy and Spain to industry newcomers  in South Africa, California and western Australia.   He talks with hobbyists, botanical experts, olive oil scientists and titans of the industry, presenting a vast array of interesting and often divergent viewpoints.   Many of his subjects are from families that have been in the business for centuries and Mueller conveys their obsession with skill and enthusiasm.

But as the book progresses, the author’s primary motivation becomes evident.  The olive oil industry is dying a slow death, despite the product’s burgeoning worldwide popularity.  Unscrupulous producers, wholesalers, retailers, restaurateurs and government officials have allowed widespread adulteration of “extra virgin olive oil” to the extent that this indication of highest quality has been rendered meaningless.  Fresh olive oil is expensive to produce and distribute and 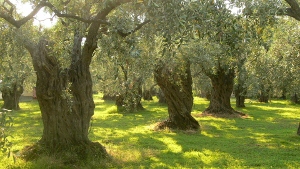 Ancient olive trees on the Greek isle of Thassos

adding old cottonseed oil – previously of no commercial value – and maybe a little extra green food coloring will help your profits skyrocket.  Most “extra virgin olive oil” sold in supermarkets is cut with other cheaper oils and fails standardized chemical and taste tests.   Unfortunately, industry corruption in Europe and regulatory apathy in the US has hindered all efforts to control this problem and the honest producers are gradually being priced out of the market.

Extra Virginity is a passionate and effective plea to save an ancient and glorious industry that provides important culinary and medical benefits to humanity.   At the end of this entertaining read, Mueller includes an extensive guide to finding high quality oil that has been produced with care and honesty.  If what he says is true, I probably have never tasted the real thing even at the finest restaurants.  You probably haven’t either.