Sex and the Single Bird… 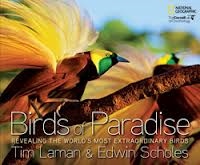 It’s all about sex.   So much of what’s beautiful and bizarre in the animal kingdom is related to sex.  From the peacock’s fabulous tail to the elk’s enormous antlers – maybe even the giraffe’s long neck – some creatures put a remarkable amount of evolutionary energy into structures and behaviors designed solely for one thing.  Sex.  The more the better.  Perhaps no place on earth is this more apparent than on the island of New Guinea – second largest in the world – home to the strangest family of birds on the planet.  Seeking to document all thirty-nine known species – many for the first time – wildlife photographer Tim Laman and ornithologist Edwin Scholes spent countless hours and endured innumerable bug bites to produce a photographic masterpiece, entitled Birds of Paradise.

Serving as a living laboratory for sexual selection – where female preference drives the development of otherwise maladaptive physical and behavioral traits in adult mate-seeking males, first elucidated by Charles Darwin – New Guinea’s male birds-of-paradise are famous for their fantastic plumage and intricate mating dances.  Once he’s of a mature age, a male Queen Carola’s Parotia spends all his time making sure his chosen patch of forest floor is clear of all debris so he can perform his bizarre “skirt” dance without distraction, hopping around like a deranged ballerina whenever a female stops to watch on an overhanging branch.  If she finds the dance to her liking, she may choose to mate with him.  If not, she will go on to find a dancer she prefers.  Either way – rewarded or rejected – the male will prepare for the next dance, devoting virtually all of his time and energy to perfecting this singularly important activity, if he is to have any hope of passing his genes on to the next generation. 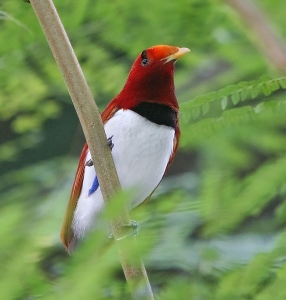 Many of the other birds in the family Paradisaeidae – most closely related to the crow family – have similar mating rituals, one more bizarre than the next.  Unfortunately, given that the tropical highlands of New Guinea are some of the most rugged and remote environments in the world, ornithologists have struggled to document the details.  But Laman and Scholes were up for the challenge.  Visiting over fifty field sites throughout New Guinea, the surrounding islands and the northern Australian mainland, the twosome spent over two thousand hours hiding in blinds on their eight year quest, patiently waiting to catch just the right photo or video of their plumed quarry.  The resulting book does the adventure credit, whether showing the incredible iridescent colors of the Splendid Astrapia or the bizarre bald blue scalp of Wilson’s Bird-of-Paradise.  Many of the images included are of dances or behaviors never before documented or even witnessed, not surprising given the reclusive nature of many of the species or the fact that some behaviors take place 50 meters up in the trees. 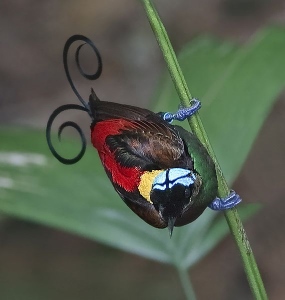 But the book is much more than just breath-taking photographs.  Sponsored by The National Geographic Society and the Cornell Lab of Ornithology, the book includes detailed ornithology and meticulous geography, as well as plenty of fascinating historical and cultural details about the birds and the region.  Often following in the footsteps of the great naturalist and explorer Alfred Russel Wallace – the first European to identify many of these species – the combination of photography and scholarship makes for a remarkable reading experience.

Possibly the finest book of nature photography I’ve ever had the pleasure to read, Birds of Paradise is a truly impressive accomplishment.  Risking life and limb repeatedly and devoting a significant portion of their lives to the effort, Laman and Scholes capture some of the most extraordinary and bizarre wonders of the natural world and present them beautifully.  Their enthusiasm for the quest flies off the page and had me checking The Macaulay Library on the Cornell Lab of Ornithology web site to view the many of the delightful bird-of-paradise videos that were a result of their efforts.  As a lifelong nature fanatic, the book is everything a nature book should be, I can’t recommend it more highly.