What would it be like to get into the mind of your cat?  What does your dog think about all day?  Humans have spent a lot of time speculating about such seemingly unanswerable questions with less than convincing success.  However, as we approach animals more closely related to us, maybe it becomes easier to be accurate.  It’s really not that hard to tell when a chimpanzee is angry and observers can often deduce why, using nothing more than natural human intuition.  While plenty has been discerned about the social and psychological life of our closest living ape relative, the challenge is much greater when 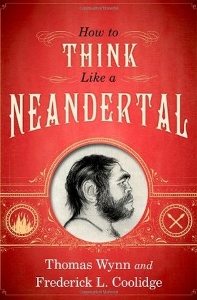 In How to Think Like a Neandertal, Anthropologist Thomas Wynn and psychologist Frederick Coolidge, both professors at the University of Colorado at Colorado Springs, take the reader back in time about 200,000 years ago when Neandertal* men and women roamed much of Europe and Western Asia, living in small groups and slaughtering three ton mammoths and rhinos with stone tipped spears.  With nothing but primitive weapons, fire and their wits they survived in a harsh Ice Age climate for a few hundred thousand years, until they were displaced by modern humans about 30,000 years ago.

Combining vast amounts of archeological data with the current understanding of modern human and ape psychology, the authors try to piece together the inner workings of the Neandertal mind.  Starting with artifact based topics like technology, innovation, family life and education, they then move on to more speculative areas like language, death, humor, dreams and personality.  It may seem almost silly to try and consider what kind of dreams a cave man might have had way back in the depths of time, but in just two hundred pages the authors painstakingly build a surprisingly plausible and entertaining scenario.

The book ends with a grand finale of a thought experiment.  First, the authors concede that a thoroughly modern adult human wouldn’t last more than a few days if magically plunked down into the Neandertal’s brutal world.    But they then go on to explore what would happen if a modern human infant was transported into a Neandertal family and raised among them.   They then continue 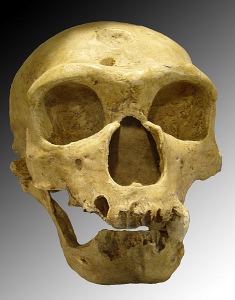 A Neandertal skull discovered in 1908 at La Chapelle-aux-Saints

the experiment by reversing the situation.  The synthesis of all their conjectures and inferences is really quite remarkable.

The authors’ collaborative efforts make for an enjoyable read – they create a nice balance between their respective disciplines – and I respect their consistently fearless speculation.   While some may object that this work is really more fiction than fact, the authors base all of their hypotheses on a bevy of well documented facts and never fail to make it clear when they’re switching from one to the other.

It’s not easy to read anyone’s mind.  It’s particularly challenging when your target is a different species (or subspecies).   Even more so when your subject lived 200,000 years in the past.  Yet, in How to Think Like a Neandertal,  our courageous authors don’t hesitate to go all in, even so far as to contemplate what kind of jokes our ancient hominid siblings might have told.  A thought-provoking read for anyone interested in human prehistory or bold science writing.

*The modernized spelling and correct pronunciation drop the letter “h”.