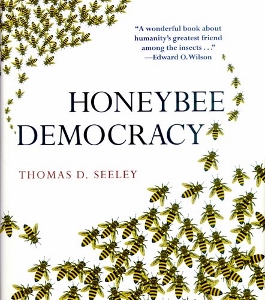 It’s one of the wonders of the natural world.  But despite its rather fearsome appearance, a swarm of honey bees is a fairly harmless entity, if you keep your wits about you.  Honey bees swarm when their hive becomes overcrowded.  They gorge on honey, round up about 10,000 volunteer sisters, grab the queen (their mom) and exit the hive with an impressive roar, heading to a branch on a nearby tree or bush.  And there they sit, a giant ball of writhing feminine bee life protecting the queen, waiting for their next step.  They may stay like this for several days, through wind, wet and cold if necessary, until they’re ready to move.

Eventually, when the time is right, they’ll take flight and head directly to their new home.   They won’t get lost, they won’t change their minds, they won’t take an errant left turn, they’ll fly straight there in a beeline.  How do they do it?  How do they know where there’s a space that’s large enough, dry enough and safe enough to serve as a new hive?  There are mysteries a plenty in this story and Thomas Seeley, a honey bee enthusiast and scientist, has spent most of his life revealing many of these secrets.   Much to the joy of honey bee fanatics everywhere, he’s chosen to share them quite eloquently in Honeybee Democracy.

While a queen honey bee may produce hundreds of thousands of offspring in her lifetime, she’s only got two ways to pass her genes on to the next generation: producing drones (male honey bees) who can fly off to mate with other queens; or flying off with a swarm, leaving some of her daughters behind to raise a new queen.  So every spring, if the hive has survived winter in good shape, there’s a strong reproductive drive to swarm.   Carrying on in the great tradition of mentors like E.O. Wilson, Bert Hölldobler and Bernd Heinrich, Thomas Seeley has been studying the intricate details of honey bee behavior for forty years.   His initial work focused on how foraging bees communicate with each other about the location of prime nectar sources – using the famous waggle dance – but over the past couple decades he’s studied how they decide when and where to move when they need a new home. 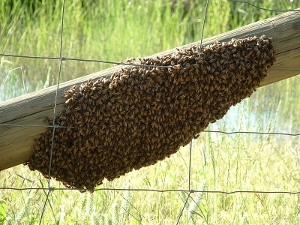 Honey bee swarm on a fence.

In the old days, bee observers assumed the queen was in charge of crucial hive decisions – she was called the queen for a reason – but subsequent research has shown that hive organization is much more collectivized than anyone realized.  It turns out that the queen just does as she’s told, laying eggs all day long and taking orders from the workers.  The workers simply go about their business, performing dozens of  hive care tasks that somehow mesh together, creating a seemingly intelligent “super organism” that can reliably make complicated decisions, even though no one individual’s really “in charge”.

Since a swarm is often hanging off the low branch of a tree, it’s easy enough to just sit and watch.  And that’s how Seeley started, just watching swarms closely and trying to keep track of what the bees were doing.  He was able to confirm what previous observers had suggested, that numerous scout worker bees were using waggle dances to tell their swarm mates about the best new lodging options – often flying a few miles away in their search.  But keeping track of hundreds of scout bees doing dozens of different dances proved to be an impossibly formidable task; so Seeley had to come up with a way to monitor the whole swarm.  Using an ingenious array of video surveillance, customized hives, remote island laboratories and clever graduate students – combined with an incredible amount of patience – Seeley was able to slowly tease out the details, eventually explaining how thousands of bees can agree on a single new home in just a few days.

Seeley provides myriad details about the various ways he set up his countless swarm experiments –too many details for some maybe – but he describes the work as such a grand adventure that I found myself increasingly enthused, rather than bored.  I found his tireless, creative approach to numerous seemingly insurmountable experimental obstacles nothing short of awe inspiring. 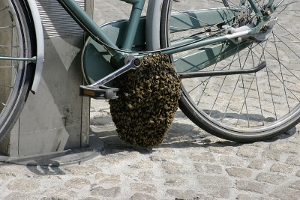 Honey bee swarm on a bicycle.

But the author isn’t just interested in bees.  At the end of the book, he explains how the mechanisms honey bees use to make decisions are remarkably similar to the way the neurons in the primate brain process sensory inputs prior to making a decision.  As in the honey bee swarm, there’s no single neuron in charge of the brain, they simply work together to collectively create what we call intelligence.  Seeley has also used these insights to create rules that can help humans make more optimal group decisions, finding numerous correlations with the traditional New England town meeting.  He actually uses these rules when he chairs meetings of the Department of Neurobiology and Behavior at Cornell University.

In the world of beekeeping – I’ve been keeping bees for the past three summers – swarm prevention is a routine spring time goal.   After all, honey production is going to suffer if half your bees fly away, absconding with a high quality queen.  But after reading Honeybee Democracy, I have an increased level of respect for this remarkable and complex wonder of the natural world, something to marvel at rather than fear or discourage.  The book’s artful combination of imaginative scientific acumen with clear and concise writing makes for a fully engaging read.  It’s unusual to find a scientist who can so vibrantly transfer their passion to the page, avoiding the many potential technical tangles.  Strongly recommended – with a vigorous waggle dance – for beekeepers everywhere or for anyone interested in animal behavior and intelligence.