Cozy at the Speedway 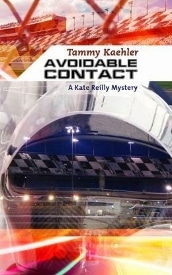 First thought: I did not enjoy Avoidable Contact. Second thought: I’m still going to recommend it. I’ll let you stew on that little bit of cognitive dissonance while I tell you about the book.

Kate Reilly is a race car driver. She and her team at Sandham Swift racing are about to begin a 24 hour endurance race at the Daytona Speedway when she gets news that her boyfriend, Stuart, has been hit by a car and critically injured. Kate needs to pull it together and get her head in the race since being distracted on the track is a recipe for disaster. Unfortunately, she finds herself pulled into not only the investigation into Stuart’s accident, but team and family drama as well as she and the rest of her crew try to complete the grueling race.

Avoidable Contact is author Tammy Kaehler’s third outing with Kate Reilly, race car driver, and it shows. The characters of Kate, her friend Holly, and some sketchy family members are well established and first time readers are cautioned to start at the beginning of the series (Dead Man’s Switch) rather than try to jump in here. Kaehler provides a good amount of back story detail, but Kate has a complicated life and the kind of small boluses of information that fit into this installment really aren’t enough to allow first time readers to keep the characters straight without a lot of flipping around.

That said, I like Kate. She’s pretty tough, but not so much that it feels like she’s trying too hard. She has a slippery grip on exactly what it is she wants from her personal life and career, appropriate for a 25-year-old woman. She has an open mind, but not so much that it leads to stupidity, and she’s not afraid (though she doesn’t like it) to admit when she’s wrong. With as much family baggage as she’s carrying she makes for a good, strong cozy series heroine with lots of potential for future installments – especially given her dangerous profession.

Avoidable Contact is also well written, with a fairly tight plot, a decent mystery and a nice mixture of sleuthing, racing and personal drama appropriate for the cozy genre. It’s paced well and blessedly is not filled with typographical and grammatical errors (not something I can take for granted these days).

Yet, I didn’t like it. In fact, I had a hard time even getting through it. And there’s one very simple reason – this book is written for people who know about and enjoy car racing. The terminology, team dynamics, car talk and driving ecstasy simply do nothing for me – and they’re confusing for those of us who spend less than no time thinking about car races. There are parts of Avoidable Contact that might as well have been written in Klingon for all that I got from them, which made them really, really boring. I’m very sure racing enthusiasts would disagree.

So the bottom line is that Avoidable Contact has all the right ingredients to be a good cozy mystery, but it also has a very specific target audience – people who are familiar with and fans of auto racing. If that isn’t you, you’re going to find the series confusing and get bored quickly. On the other hand, if it is you, definitely give it a shot. I would recommend, however, starting with the first book in the series, Dead Man’s Switch, and reading them in order to get the most out of the juicy details of Kate’s complicated life.