GET OUT OF MY HOUSE! 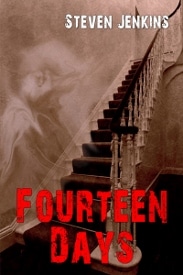 Like a lot of people, I love a good horror story. Also like a lot of people, it’s not easy to scare me because I’ve read so many horror stories. But a haunted house story gets me every time. There’s something innately sinister about your own home turning against you. In Fourteen Days, author Steven Jenkins manages to give us a good scare in a short read.

Richard Gardener is a busy, busy man. He’s a vital part of his workplace; in fact he’s quite sure they wouldn’t be able to do without him. He puts in lots of hours, drives himself hard and gets the job done. Unfortunately, his body isn’t happy with his lifestyle and one day simply decides to faint in front of the head of the company. So much for busy. Richard is ordered to stay home for 2 weeks, not work, not call the office – just rest. Fourteen days in his home to do as he pleases and get his strength back. He is not happy.

Richard is bored, and worried about work. But he will discover that those are the least of his worries during this forced holiday – it would appear that he has an unwanted houseguest. He doesn’t believe in ghosts, his wife Nikky really doesn’t believe in ghosts, and he’s wondering if the boredom has driven him off his rocker. He has two weeks to figure it out and we get to go along for the ride.

First, what I really liked about Fourteen Days, and that’s quite a bit. Richard is a great protagonist. He isn’t particularly likeable, so we don’t spend the whole book feeling sorry for his various plights, but he feels very real. Everyone knows someone who simply cannot sit still, who thinks their office will fall apart if they miss one minute of work and can only be persuaded otherwise by force. It’s fun to watch Richard cope with the realization that he might not be the vital cog he imagined himself as he sits and stews in his house.

Another thing that feels real is his fear as his guest makes her appearances. He doesn’t take it in stride like a lot of horror story heroes, he doesn’t get used to it – it scares the crap out of him. Every single time. Jenkins does a particularly good job at allowing his readers to feel that fear, and it’s far more effective a tool for scares than even the creepiest ghoul or ghost.

I also loved Nikky’s reaction (and Richard’s response to that reaction). She’s a diehard skeptic who teases him pretty relentlessly about his supposed sightings. She doesn’t back off or become a believer the instant something unusual happens. Even better, he doesn’t sulk and stop trying to talk to her about the whole thing. That feels very real – couples in books too often immediately resort to stubborn, silent sulking when it isn’t convenient for the story to have them sharing information. Jenkins gets around them working together by simply keeping her character consistent. And sort of mean, which helps soften him for us as the story progresses.

I also liked that Jenkins kept his story tight. At fewer than 200 pages, there’s not a lot of room for rambling sidetracks and unnecessary subplots. He stays on target throughout.

Fourteen Days isn’t perfect, though. Unfortunately, the ghost story loses a little bit of steam in the second half of the book as Richard delves into the mystery. His encounters and reactions are still good and scary but as the mystery begins to unravel it feels just a touch pedestrian. Not so much that the book isn’t well worth reading, but a little disappointing.

Overall, Fourteen Days is a fast paced, engaging, scary ghost story that only falls down a bit in resolving its mystery. If you’re a fan of the haunted house tale, it’ll grab you and make you scared to get up and go to the bathroom if you read it late at night. As a fan, you know that’s a good thing. It’s a lightning quick read and hard to put down. 4 stars out of 5 and a solid recommendation for Steven Jenkins’ Fourteen Days.

My thanks to Mr. Jenkins for sending me a copy of his book for review.