King of the Poles… 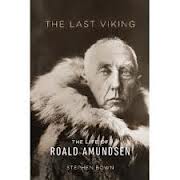 Their names are forever linked in history.  A little over a century ago, Norwegian Roald Amundsen and Brit Robert Falcon Scott were both on the Antarctic continent in a “race” to be the first man to stand at the South Pole.  As any history buff knows, Amundsen arrived there first, on December 14, 1911, while Scott didn’t make it until a month later and proceeded to die, along with his comrades, on the trip back.  Ever since then, Scott’s been portrayed as an ill-fated hero of the age of exploration and his tragic Antarctic story has become a romantic saga of dogged British intrepidness, leaving Amundsen to play the role of heartless spoiler.  Rarely has the Norwegian’s perspective been considered, despite the fact that his list of accomplishments places him at or near the top of the list of greatest explorers of all time.  In The Last Viking, Canadian history writer Stephen Bown attempts to correct this injustice with a fascinating biography about the king of the poles. 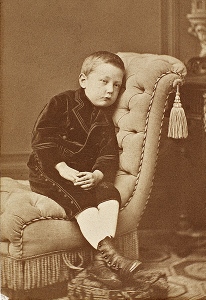 The author divides Amundsen’s story into four sensible chronological sections, following some brief introductory information about the man’s childhood and his first trip to Antarctica on a Belgian expedition.  Bown describes the first successful completion of the Northwest Passage, detailing Amundsen’s interactions with the Inuit people of Arctic Canada, where here learned about dog sledding and clothing traditions from the experts.  His respect for native peoples and his willingness to learn from them were a key part of his future success in Antarctica, explored in great detail in the second part of the book.  Returning victorious from the South Pole, Amundsen quickly became an international celebrity who subsequently went on to sail the Northeast Passage along the Siberian coast and then flew to the North Pole in an Italian dirigible in 1926 – the first undisputed attainment of the pole by any human.  These last two adventures make up sections three and four of the book.

Bown’s descriptions of these exploits are thoroughly entertaining even when Amundsen occasionally failed in his quests.  The explorer’s numerous attempts to fly to the North Pole are almost comical at times.  Aviation technology was literally in its infancy, yet Amundsen thought it was reasonable to try and fly to the top of the Earth in a flimsy open aircraft.  He just made sure to bundle up really well. 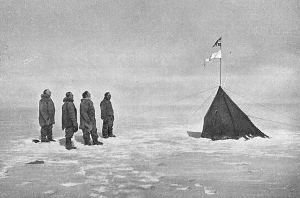 Amundsen and three of his comrades at the South Pole in 1911.

Consistently doing a nice job of placing the man’s story in an appropriate historical context, the author never hesitates to rise to Amundsen’s defense, particularly when he is slandered by the British, who were convinced that he had cheated Scott of his claim to South Pole glory.  At the same time, the biography isn’t overly fawning or biased as the explorer’s failures and shortcomings are given an ample airing.

Focusing on Amundsen’s whole resume – not just the “race” to the pole so deceptively hyped by the press – Bown tells a fascinating and engaging story about an incredible man.  I can strongly recommend The Last Viking for anyone interested in the history of exploration, especially if – like me – you’ve always viewed Roald Amundsen as a trivial historical afterthought from quiet little Norway.  Five sparkling ice coated stars.