Aliens Trump Vampires in “The Host” 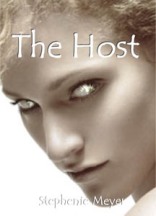 As much as I like YA fiction, I didn’t jump aboard the Twilight train.  I read the first book and didn’t hate it, but found it too angsty for my taste so didn’t continue the series.  I was a little dubious about wading into author Stephenie Meyer’s tome-like stand alone, The Host, but with a strong recommendation from both a YA and an actual A, I took the plunge.  I’m not sorry I did.

The Host (now a major motion picture!) takes place on a future Earth where human beings are no longer the dominant species.  They’ve been replaced by “souls” – a parasitic species that uses human bodies as hosts while eliminating or deeply repressing the human personality that once resided in them.  Souls are peaceful, curious and technologically advanced.  They have taken over many planets, those where it was deemed that the dominant species wasn’t worthy of the bounty offered by their worlds.

Our focus isn’t on the invasion.  The Host takes place well after that fact.  The takeover is all but complete, with souls happily occupying their human hosts.  There are a select few souls that chose as their occupation to be “Seekers”.  Seekers are those souls who actively search for any human bodies left in human control.  They tend to be a little more aggressive than the average soul and we jump into this world as a soul called The Wanderer is placed into the body of one of the few holdout humans.  The Seeker assigned wants the information that this human possesses (souls have access to all the memories of the previous occupants of their bodies).  Unfortunately for The Wanderer, she has been put into a fighter.  Melanie will not be folding to the will of this new soul, nor will she be supplying her with information.

Needless to say, this causes complications.  The Host is the story of what happens when a soul and a human duke it out

for control of the single unit of flesh and blood that gives them both life.

Our two main characters are The Wanderer and Melanie.  The story is told by Wanderer but since she and Melanie are so intimately connected, we know her thoughts as well.  The first third of the book flies by quickly as we learn about the souls, the invasion, Wanderer and her past hosts, and the possibility that there are still a few humans left in control of their bodies.  Meyer does a very good job introducing the relatively complicated concept of the gentle souls and how they live, as well as the horrified reaction of the humans watching as their world is taken from them, one person at a time.  That the souls have never really considered that relieving a body of its consciousness might not be the kindest thing to do makes them feel naïve rather than evil.  That’s a pretty good trick – Wanderer is sympathetic enough that we don’t hate her species like we might in a horror movie (let’s face it, this is really just Invasion of the Body Snatchers with a twist).

As we get further into the story, things begin to bog down as Wanderer and Melanie cohabitate in Melanie’s body.  What is essentially the evolution of Wanderer takes a good long time and is peppered with complicated relationships with humans.  It’s more than a little slow as Wanderer begins to question the ways of her species, her own wants and needs and her place in the grand scheme of this planet.  Of course there’s a romantic triangle (with Jared from Melanie’s past and Ian from Wanderer’s present) and easy, cliched commentary about societal violence, individuality, the strength of the human spirit and more.

The cover of my copy. Not as cool.

The final third of The Host sees the action pick up again as Wanderer’s untenable situation comes to a head.

I actually enjoyed The Host quite a bit.  It isn’t the philosophical dissertation on humanity that it seems to want to be, but it’s a good story with strong protagonists and an interesting and complex set of problems to be addressed.  The notion of an invading species that doesn’t want to change anything about the planet except the way the inhabitants behave is kind of novel and it’s presented without the gore and carnage that usually come with alien invasions.  Despite its considerable length it’s a fast read if you can power through the slow middle section.  One of my biggest complaints is that my copy of the book had the actors from the movie on the cover and they didn’t mesh well with the visions of the main characters that my imagination insisted on making.  Not a reason to avoid the book, but it makes me leery about the movie.  4 stars out of 5 for The Host and a recommendation for YA fans – both teen and adult.