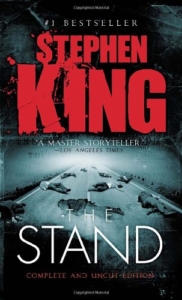 The Bravery of Choice: Life After the Apocalypse

Combining horror and philosophy into a haunting literary mélange, The Stand has long been touted as one of King’s most revolutionary and enduring works. Integrating visceral horror with psychological trauma and spanning a wide scope of characters and choices, the 1000 + page work is a true opus, almost an epic, with a distinctive set of parts. First there is death, then recovery, and finally: ultimate choice in which the characters choose to stand for their beliefs.

It all begins in the dead of night when a lone man and his frightened family flee a contaminated military/scientific base, unknowingly carrying swift carnage with them in the form of a genetically engineered super flu. From the first page, the novel promises to probe our deepest fears and examine probability, portraying an eerily believable disaster coupled with the multiplying consequences of spreading disease. Reminiscent of the second season of Millennium (you recall that old 90’s show right?) the apocalypse starts with a mysterious plague but ends with a fight between God and the devil, the somber Book of Revelation taking on immediacy in blood drenched prophecy.

In the beginning there is flu, innocuous normal sickness, which leads to a swift destruction of 99% of the world’s population, leaving a few distraught survivors behind to rebuild or implode. It’s here, in the heart of the everyday, that I found myself most disturbed and effected by the novel’s evocations of the all too possible. A current fear worldwide, biological warfare and the development of disease strains capable of wiping out the globe several times over hits very close (too close) to home. It’s the silent, creeping nature of disease, especially something as common as the cold, which gets under readers’ skins, worming into our dreams.

By the time the bodies begin to pile up, King has created a huge cast of protagonists and antagonists from the rebellious and independent Franny to the schizophrenic Trash Can Man. What’s truly amazing, even for King, is that readers have a strong sense of the individuality of each person and, through all the flaws, have become personally involved. It’s then that the full cruelty of the novel and its shattering horror become visceral. We watch Franny burying her father in the backyard, surrounded by a once lively community transformed into sudden corpses and starving pets, very literally alone in the world. We watch Nick Ambrose try to keep order in a dying town only to loose both his friends and enemies. We see Lloyd Henreid, small time criminal, stuck alone in a jail cell, torn between cannibalism and death. And of course, there is much more, going all the way back to the silent ranks of the military who watch through the dead-glass of a camera the decaying facility with bodies suspended in near-life: the first front where the super flu broke loose. The crushing sense of loss and aloneness, the mixed despair and fear takes The Stand beyond horror and gives it the benediction of literature. If you don’t cry, if you don’t mourn, if you don’t fear with these characters, then you yourself are not truly alive.

Following death, the individual characters, desperate and lonely, seek other survivors. But mostly, there are bodies, many still stuck in the traffic jams in which they died – suspended in moments of death that are reminiscent of their last, final attempt to escape an invisible force. Crawling through this charnel house, the survivors begin to dream, and it is these dreams that initiate the second portion of the novel, or in an essence, split the novel into two separate stories. The decay of the old society followed by the rise of the new one, and all the decisions that start civilization down a slippery slope yet again. The living dream of The Walkin’ Dude, a dark man with coal blazing eyes and the power to lead, and of an old black woman in Nebraska who offers solace and peace from the Dark Man. Each dream promises life and redemption of the world, but what master will you choose? Pitted against each other, the forces of good and evil take on their own distinctive forms. Meanwhile, the super flu still lives and the remaining wonder if new life (i.e. infants) can even survive or be brought into this world. Are the choices, the attempts to rebuild, really all in vain anyway?

What’s interesting here, and very Stephen King, is the traditional God vs. the devil story told with a secular prospective. It kind of works in a way, but taking religion completely out of the piece, only formulating vague quotes around Revelation and allowing our characters to remain skeptical, although peaceably agnostic (with an openness to possibility that remains oddly untapped) keeps the essential dialogue of choice on a shallower level. Characters choose between good and evil, yet the definition is deliberately vague and the reasons for choice even more nebulous. Both The Walkin’ Dude and Mother Abigail purport to a higher power than themselves, but neither seem especially concerned to state much about this power or do any form of evangelizing. With the villainous demon turned dictator, this makes sense (he wants all the attention and worship for himself) but with Mother Abigail it seems a bit more questionable. Our wise spiritual leader figure and the center of dreams that have unified diverse communities across a dead world, she’s surprisingly quiet and nonessential dare I even say uninvolved. Yet, still, something in the warfare of elements greater than the everyday opens the question to bigger philosophical and religious debates which takes the novel to a level beyond monster vs. man. If only King would have been brave enough to finish the hard subjects he broaches.

Attempting to thwart the Dark Man through restructuring society, our survivors start to rebuild their own definition of democracy, opening the book up for conversations: what did the old society do wrong and how did we essentially get here – at the apocalypse. Some of these moments and discussions are deep and thoughtful, others borderline tedious as a large chunk of page space gets devoted to the creation of a committee (from which we get sheaves of notes to read.) What continues to remain steady through both the strong and the weak moments of life after a cataclysm is the strength and verity of the character creation and the complex interactions that lead to love, betrayal, sacrifice, and faith. Essentially a story about people, The Stand discusses society and everything from history to possibility, but through it all remains focused on the impact to the individual and the impact of the individual.

After such buildup and such a monumental verve it’s hard for King to out-do himself with a suitable ending. The questions he’s proposed, the fears he’s evoked, the wide ranging and yet personal nature of the entire narrative, are ultimately unanswerable. It’s an impossible task and yet King tackles it, and does fairly well. We knew, at least half way through, that no conclusion could ever satisfyingly answer all that has been posed or even the grandness of the villain. And, it doesn’t. It’s somewhat of a disappointment – but not an epic one. It’s a soft letdown and still satisfying. What lingers is what is meant to stay: the eeriness of a world collapsing from plague and the heft of individual morality and mortality. At the conclusion, readers will be rocked by The Stand and permanently haunted.