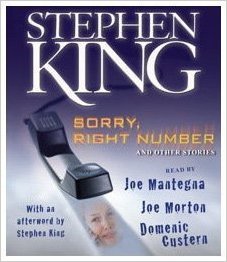 Plowing into a second one hundred hour work week with a torturous interstate drive into the most difficult-to-navigate portion of Virginia, I had no chance to run to the library for emergency audio books. Fortunately, a long ago trip to an atmospheric, albeit tightly crammed bookstore, had armed me with one emergency audio book, purchased because although it looked like it had been through several wars and possibly a few fires, it was under a dollar and it held stories from my beloved Stephen King. In a state of booklessness, I finally turned to Sorry, Right Number fingers crossed that the discs wouldn’t skip too much, and that King could keep me so terrified that I would be able to stay awake during the long, after midnight drives home.

Sorry, Right Number is a collection of four vintage Stephen King short stories presented by a cast of readers. The charming picture of a boxy old landline and a frantic woman clasping the phone captures everything that is nostalgic and viscerally primitive about 80s horror and the rawness of King’s original works. That, and I find vintage King to be the very best (may I mention Cujo, Pet Semetary, Firestarter, Christine, From a Buick 8, and ok, ok, I’ll shut up now.)

Specifically, this audiobook collection provides a compilation of four short stories from King’s Nightmares & Dreamscapes with an afterword recorded by the author himself where he discusses the stories within the original collection, including the four chosen for this audio rendition.

The collection begins with an introduction to a shady individual, abducting and selling children to keep his gambling addiction afloat. In “Popsy” the kidnapper gets a surprise when the pale, crying child he abducts shows signs of unnatural strength and claims that his missing Popsy will come and rescue him, threatening an untimely end. Raw in a sinister way, the delivery of the story, specifically the atmospheric reading and complimentary sound effects transform an interesting story into a gripping one. The presentation here draws readers into a horror story that is otherwise average with a predictable twist.

The next story is the collection’s name sake, “Sorry, Right Number.” Encumbered with sound effects and regrettable overacting, the story progresses more like a play. This is the tale which boasts the full cast and the effort of all involved is evident (albeit often forced). “Sorry, Right Number” has since been transformed into numerous screen plays and even (if I recall correctly) a movie or television creation. The production is fancy, lavish even. Yet, the story itself seems bland, especially for a King tale. The overacting panic of the wife in question who receives a frantic phone call that is only explained years later evokes old black-and-white B-horror movies and the reasons behind the call, its purpose and possible offer of retribution remains vague at best.

Following this story, the audio book launches into my person favorite from this collection: The Ten O’Clock People. Smokers trying to regulate their habit begin to see things in the world, specifically alien entities, as they really exist. The nicotine which effects their brains and opens their eyes leaves them terrified. How to thwart an invasion so few can see? How to keep from being discovered by the malignant beings who desire to end all opposition? The story has an aura that reminds me of the alien representations in From a Buick 8, combing that strange, putrescent alien world with something not only extra dimensional but extra perceptual and alien in multiple contexts. The story only disappoints in its abrupt conclusion and the fact that it feels like a larger, more in-depth narrative that was glossed over.

Before launching into the final short story on the audiobook, listeners are presented with an afterward to Nightmares & Dreamscapes where King talks about the writing of the collection and the inspiration for certain pieces (including the four provided in the collection.) It’s a little strange, because King spends time talking in-depth about stories that are not included on this audiobook, making readers grope for the case in search of missing CDs.

The final short story is a peculiar one to include with the three previous supernatural more-than-meets-the-eye stories: “The Beggar and the Diamond” which is King’s own retelling of a Hindu fable. Complimented by traditional Indian music, the piece has a distinctly different aura, although it does lend a sort of mystical perception on human unhappiness and the adequacy and inadequacy of the items and hopes that get us each through a blinded, self-deluded, unaware life.

Overall, while each story on its own is nothing spectacular, all are enjoyable and entertaining. The production here is what truly snatches readers imagination’s and transports us to another plain of existence somewhere deep inside the diseased mind of Stephen King just as he was discovering his penchant for bizarre scenarios and monstrousness. The many lonely hours skidding down empty interstates and bumping through abandoned country roads were made bearable and even enjoyable by the high quality of the production and the expertise of many of the readers. Recommended.