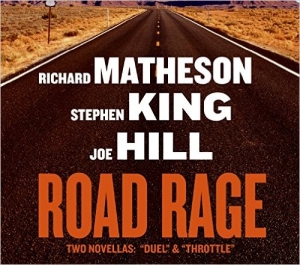 Two Novellas of Everyday Fear on the Open Road

Combing Richard Matheson’s novella, “Duel” with Stephen King and Joe Hill’s “Throttle” this engaging audio book is fast paced, full speed ahead, high stakes, and tension filled retribution on the dusty, open desert roads. Filled with lonely detours, crazed truckers, and victims reliant on skill and speed they do not have, the novellas play off of each other and build an atmosphere that is just as tantalizing as it is deadly.

Richard Matheson, most well-known for his novel I Am Legend created the iconic tale of a mild mannered salesman harassed by a semi-driver intent on hounding and eventually killing him. As the miles tick off, the salesmen oscillates from irritation to anger, to rage, to fear, and finally to heart-pounding desperation. Based on an incident in his own life when Matheson and a friend were tailgated by a semi on the same day as the Kennedy assassination, the story captures the essence of regular humanity in peril, highlighting the primal survival instinct and the sickening knowledge of inexplicable death. Targeted for no apparent reason, our salesmen works his way into our imaginations through his responses to high stress and the activated whirring of an imperiled mind.

The language is casual, mimicking the everyday as a long drive starts out, the salesman planning his strategy for the meetings ahead, thumping his hands rhythmically on the steering wheel, happy in that vague, productive work day manner. The story begins with irritation, and then delves into paranoia, and finally an examination of the flight or fight instinct. Readers are engaged instantly, the tale wrapping itself around us, the realism captivating. If you happen to be listening to this audiobook while driving on the interstate (guilty) surrounded by all those tall semis, only the truckers arm dangling from the window visible, you’ll find yourself white knuckling the steering wheel and counting accelerated heart beats.

Matheson’s novella (or, long short story if you want to be honest) inspired the Steven Spielberg film “Duel” and also captured the imagination of Stephen King and his son, Joe Hill. King, is long known for his car fascination (recall Christine, From a Buick 8, and of course, the travesty King directed while high on cocaine, Maximum Overdrive). With his love of cars and big trucks, King is the perfect master to find inspiration from Matheson’s classic and take the lonesome tale into a grittier realm.

“Throttle,” the second novella within Road Rage follows a convoy of criminal motorcyclists, escaping from a brutal double murder. When a mysterious truck driver begins to chase and take out each rider one by one, the cranked carnage leads the band leader to fight for survival while also examining his own terrible deeds. A strange story of revenge, failed parenting, and regrets, “Throttle” keeps the blood and guts King atmosphere while adding a moral to the story that leaves readers with a bittersweet victory. Who, after all, is the real villain of this piece and how far should a parent go for their child, especially if that child is a bad seed?

Road Rage, read by Stephen Lang, kept me white knuckled and tense on my daily commutes, to the point that I actually wondered whether it was wise to listen to the story while on a road filled with semis. Lang captures the tones of each character and the kaleidoscope of conflicting emotions the characters in both novellas experience as the situation progresses. Bringing alive the smell of hot tar, smoking tires, straining engines, and the wide open expanses of sun bleached Nevada desert, Lang does justice to two very engaging, unforgettable pieces. Perfect for a little October fun before the beginning of Halloween and sure to captivate readers who love tension, thrillers, horror stories, and everything related to big trucks. Highly recommended!