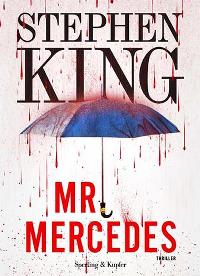 Expectations are tricky business. When I pick up a Stephen King novel, I expect there to be something supernatural in there. Not because that’s all he can write, but because, well, there just usually is. Don’t be like me – check your expectations at the door and enjoy Mr. Mercedes for what it is – a darn good police procedural.

K. William Hodges is living on the edge – of sanity, reason and most of all, boredom. As a retired police detective, he’s having a lot of trouble finding meaning in his new, far less stressful but also less stimulating, life. He thinks too often about his guns and watches too much bad daytime television. The man needs something to do.

Someone else is also noticing that Hodges is on the edge. Only this person would like to push him right over and have him eat that gun. That someone also plowed a stolen Mercedes into a crowd of job seekers in one of Hodges’ final – and unsolved – cases. When a letter from the murderer arrives in the mail, inviting the retired detective to chat a little on the internet, Hodges does what he does best – he goes into police mode and begins to turn the game around on the killer. Who’s the cat and who’s the mouse? Looks like Hodges has something to do with that free time after all.

While not exactly a textbook “detective detects” type of crime novel, Mr. Mercedes has all the ingredients of the police procedural. Only Hodges doesn’t have quite all the resources (or legal standing) to do his investigating. This allows King to bring in some rather more interesting secondary characters to assist in the hunt for the killer. Jerome Robinson, the kid who does chores for Hodges and is on his way to Harvard in a couple of years, is his computer point man. Janelle Patterson is the sister of the woman whose stolen car was used in the original crime. The sister committed suicide after being hounded in the press (and by the police) for abetting the perpetrator by leaving her key in her unlocked car. Janelle wants to see her sister’s name cleared – she always swore she didn’t leave the car unlocked and Janelle thinks there’s something awry with the suicide. She’s willing to spend a lot of the fortune bequeathed her by the deceased to make that happen.

Hodges, Janelle and Jerome are the heart of the story – just as important as the villain and the crime. Writing great characters is what sets King apart from many of his peers and he doesn’t disappoint in Mr. Mercedes. Both Hodges and the villain are smart and desperate – the juxtaposition of their responses to their individual torment makes for a terrific duel of wits, morality and compulsion. I like K. William; despite his many failings he’s got a sharp cop’s mind and a dogged determination that make him an aging, out of shape hero we can root for. His relationships with Janelle and Jerome are each sweet (in very different ways) and give King a chance to let his gruff cop be vulnerable.

Mr. Mercedes is tightly plotted, well-paced and with typically excellent King characters stands well above your average crime novel. Just don’t expect any paranormal shenanigans and you’ll find it a more than satisfying read. Recommended for open minded fans of King and of crime novels in general.