I’ll never give up on Stephen King.  I know he’s prolific and not every word that drops from his pen is golden, but no matter what the format – short story, novella, book or tome – there’s always a chance that he’ll knock one out of the 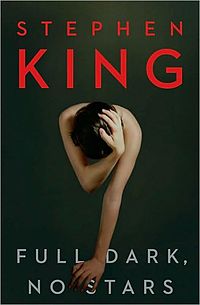 park.  The man simply has a way with characters that other horror writers seem to lack.  In Full Dark, No Stars, King is in novella form – and a fine form it is.

There are four stories in Full Dark, No Stars.  In the afterward (well worth reading for some insight into how King thinks and writes) he pulls them together thematically, but each has charms of its own.

The first story centers on Wilfred James.  Wilf is a farmer in Nebraska and is having some trouble convincing his wife that they need to keep all their land (some of it belongs to her) rather than sell to a large hog farm and go live in the city.  He’s having so much trouble, in fact, that he decides to kill her.  He also decides that his teenage son will be his accomplice.  We all know that these things never go as planned and 1922 follows Wilf through the aftermath of his crime and the tragedies that follow.  Is he off his gourd or is he really being haunted?

This is my least favorite of the stories in Full Dark, No Stars.  It was simply too hard for me to feel any empathy for Wilf and his increasing misfortunes.  His basic conniving, greedy personality made it more than satisfactory that he not get what he wanted.  It’s a basic tale of “crime doesn’t pay” and as such, far less interesting then the stories to come.  Sadly, it’s also the longest at 130+ pages.

Now this is more like it.  King does a little lampooning of the Cozy Mystery phenomenon as he places a middle aged female author of one such series into the type of peril her heroes and heroines will never see.  Tess is on her way home from a speaking engagement when a flat tire and a not-so-good Samaritan change her life forever.  Nothing can prepare her for how she reacts to the situation, and the reader is horrified by her experience yet fascinated as she works her way through to a solution.

Tess is a middle of the road protagonist – at first.  As we invest in her we begin to see that she has more resolve and internal resources than one would expect from her outward demeanor.  King provides a very satisfying beginning, middle and end in just over a hundred pages in Big Driver.

We venture into more typical King territory in Fair Extension.  Dave Streeter is not in a good way.  He’s driving aimlessly as he ponders his recent (and dismal) cancer diagnosis.  He comes upon a small man who has set up a booth near the freeway where people come to sell various and sundry items during the warm months.  This particular evening there is nobody else there and Streeter is curious about this lone vendor.  He doesn’t really believe the man can do what he offers, but Streeter is sick and desperate.  He makes his deal with the devil.

Usually this type of story ends with a moral – deals with the devil are always bad, right?  But what if they aren’t?  What if the price you pay is one about which you find you don’t feel particularly bad?  King does a terrific job weaving a well traveled plot with a very pragmatic view of how people really feel about themselves and others.

Another well worn premise, this story tells of a woman finding out a big secret about her husband of many years.  How many surprises can really be left after sharing decades with another person, raising children, paying bills, sleeping next to one another?  Well, Darcy Anderson is about to find out.  Then she’s going to have to decide what, if anything, she should do about it.

The shortest of the four stories, A Good Marriage is solid but not stellar.  The premise is a little worn, the characters are ones we’ve seen before and the action doesn’t play out in any particularly surprising way.  I liked Darcy and her husband, though, and their dynamic is beautifully written, as is the underlying, unsettling notion of not really knowing your spouse, no matter how many years you’re together.

Full Dark, No Stars is a good but not great group of novellas.  It’s perfect beach reading (that’s where I read it) – not too intense or demanding, but still with King’s trademark ability to draw you into the bizarre happenings in the lives of seemingly average people.  Definitely take the time to read the short afterward – it ties the book together nicely.  3 ½ stars and recommended for any Stephen King fan.