Letting the Bones Out of the Bag 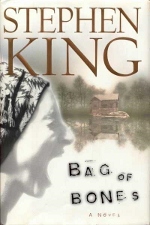 Calling something “average” really doesn’t sound like a compliment.  But it depends on what that thing is and who produced it.  When the item in question is a novel and the author is Stephen King, well, then “average” is really pretty damn good.  Average for him is hitting it out of the park for most authors.  So without intending to damn with faint praise, I would definitely call 1998’s Bag of Bones an average Stephen King novel.

Main character Mike Noonan is a not-quite-bestselling author of popular fiction.  He and his wife Johanna live in Derry, Maine and have a summer home in western Maine on a lake named Dark Score.  Since we know nothing good ever happens in Derry, Johanna dies in the first pages of the book, setting up 40-year-old Mike as the grieving widower with a crippling case of writers block.  After trying to cope for a good long time and failing, Mike finally decides to visit that long neglected summer home, named Sara Laughs, to see if he can shake the cobwebs loose.  Of course he does much more than that – running afoul of a local big shot and getting involved with a young (very young) widow and her 3-year-old daughter.

The tag line in Bag of Bones is A Haunted Love Story.  There is indeed a lot of haunting, but also a lot of different love stories.  It isn’t all about Mike and a new love, though he definitely notices that Mattie Devore is a very pretty young woman.  It’s mostly about Mike and Johanna, Mike and his writing, Mattie and her daughter Kyra and the long ago residents responsible for the strangely named Sara Laughs.  It’s a lot of different kinds of love, all wrapped together in one supernatural package.

In the supernatural haunting sense, the book totally works.  King is no hack – he knows how to write about a haunted house.  Or 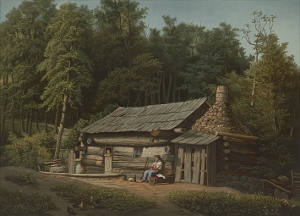 What’s lurking in YOUR cabin?

town.  Or person.  The place where Bag of Bones falls a little short is in the characters.  That’s an unusual circumstance, since I consider characterization to be one of King’s greatest strengths.

But I am not a fan of his thinly veiled autobiographical characters.  The popular fiction author living in Maine is just too damn close to being Stephen King.  While I doubt the character of Mike Noonan bears a whole lot of resemblance to king as a person (not like the brilliant use of self when creating Jack Torrance in The Shining), the external details make it hard for me not to see Noonan with King’s face.  And honestly, I have no interest in picturing King’s raging hard-on when Mike looks at a picture of his late wife or the pretty legs of Mattie Devore.   Call me crazy, but there it is.  Noonan isn’t strong enough as an individual character to overcome his admittedly pretty shallow resemblance to his creator.  Mattie, Kyra, the town’s people – none of them have quite the refined and nuanced feel that I’ve come to expect from King.  So they’re good characters, in a good story, but none comes close to reaching real greatness.

As always, the book is well plotted and paced, with appropriately evil villains and real feeling hauntings.  The child is a little precocious for my tastes, but I like the interaction between Noonan and the permanent residents living near Dark Score Lake.  Overall, this would be a solid 4 star book from any other author, but I don’t apologize for holding King to a higher standard when it comes to creating characters that feel whole. So 3 stars out of 5 for Bag of Bones and a recommendation for fans.  If you’re new to King, don’t start here – but definitely don’t avoid it if you enjoy his other work.