Teen Drama with an Evil Twist… 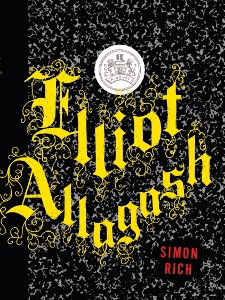 A wimpy, overweight, self-conscious eighth grade boy – bullied by the school’s star athlete and in lust with the school’s prettiest girl – finds a way to exact some revenge for the many injustices he’s suffered.  Not exactly a distinctive story line.  But in Elliot Allagash, writer Simon Rich adds some unique wrinkles in an attempt to create something different.  Maybe if I write a bit more, I’ll be able to decide if I think he succeeds.

Our victim is Seymour Herson, the lowest kid on the totem pole at Glendale, a private school in Manhattan.  Eating alone at the loser’s lunch table, he meets a classmate, the titular Elliot, and it changes his life forever.  Heir to one of the largest fortunes in America, Elliot is frequently expelled and is completely bored with any and all scholastic endeavors.  Given his limitless funds and a chauffeur with infinite skills, Elliot makes it his personal mission to move Seymour to the top layer of Glendale’s social strata and the downtrodden Seymour’s happy to cooperate.  Thanks to Elliot’s constant machinations, Seymour miraculously makes it on the basketball team, gets attention from the sultry Jessica, gets perfect grades and even becomes a local celebrity, despite a complete lack of talent or effort.  Not surprisingly, Seymour eventually begins to realize that this approach to life has its drawbacks.

While Seymour is the stereotypical high school loser, the evil Elliot is the character that makes the story interesting.  When he’s not destroying anyone who might inhibit Seymour’s ascension or masterminding a new strategy to steal answers to the French test, he’s drinking martinis, playing pool and lounging about his ten-story mansion, a refurbished Manhattan courthouse.  The image of a high school aged Stewie Griffin kept flashing through my mind.

Mr. Rich, a writer for Saturday Night Live from 2007-2011, has previously published two collections of very short works – Ant Farm and Free Range Chickens – to great acclaim, but this is his first novel.  I’ve truly enjoyed his previous written work and was excited to read this story, but I’m afraid my expectations were simply too high.   While there are a few funny moments, for the most part the story suffers from its traditional story arc.  In addition, while Elliot’s character is unique and bizarre, he’s so over the top at times that I tended to lose interest.

I think there’s a reason that the most acclaimed comedy in our culture comes in 20 minute sitcoms, short skits on SNL or bits of stand-up comedy, anything longer is just too hard.  That may be why most comedic movies fail; it’s simply too difficult to sustain the humor.  Moreover, writing sustained comedy for more than 200 pages may simply be impossible.  Like his previous work, Rich reveals all sorts of humorous ideas in this novel, but all the other components like plot, characters and the filler bits between the funny ideas are pretty conventional and actually get in the way.  To be more concise, I’m not convinced that Rich’s formidable comedic skills translate well into a novel format.  Reportedly, a movie version of Elliot is in the works and I expect that I’ll like it more than the book, after the screenwriter distills the story down to its 98 minute essence.

In the end, Elliot Allagash is a novel that contains some funny ideas and a unique title character, but I found it too slow and contrived most of the time.  I’m a big fan of Rich’s short work, but this story left me disappointed.  Not recommended.