Emperor of All Maladies, The

The Life Story of Cancer…

Cancer affects everyone, either directly or indirectly, and given the seemingly indiscriminate manner in which it chooses its victims, it’s a topic that garners a lot of attention.  But despite decades of intense effort and expenditure, medical science hasn’t really seemed to make a substantial dent in the destruction that 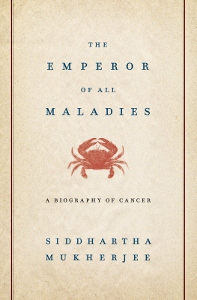 cancer leaves in its wake.  There may be a few victories here and there, but the “C” word still evokes the same dread that it did when I was a kid.

But maybe change is on the way.  About ten years ago, Dr. Siddhartha Mukherjee began his oncology training in Boston, writing about his experiences in a journal.  This modest literary project quickly evolved into a much more substantial mission, The Emperor of All Maladies, a comprehensive account of the 4000 year history of cancer.  I’ve never read anything quite like it.

Describing the book as a biography, the author starts by discussing the very first reference to the disease in an ancient Egyptian text, with subsequent exploration of the Greeks and Romans, quickly bringing the story to the 19th century and the birth of modern medicine.

He subsequently covers all the major milestones in the progression of modern cancer treatment.  From the brutal combination chemotherapy “cocktails” that were developed to treat childhood leukemia to the rise and fall of the radical mastectomy, he provides a detailed look into the logic and controversies that surrounded these efforts.  Even with more recent innovations, like autologous bone marrow transplantation – which allowed for vastly more toxic chemotherapy – it eventually became clear that doctors were wandering in the fog without a map.

Mukherjee explains that clinicians and researchers had convinced themselves that actually understanding the disease was unnecessary if you had the right chemicals or surgical techniques in your arsenal to destroy it.  Eventually, the flaws in this logic became apparent and greater efforts were deployed to try and determine the actual causes and mechanisms underlying the disease, a formidable challenge given the incredible variability found even within a single type of the couple hundred varieties of cancer that are out there.

Many candidates were nominated: viruses, bacteria, chemicals, hormones, and defective genes all seemed to be plausible candidates, but it was difficult to figure out how these completely  different actors could all cause the same basic pathological process.

The author also presents a detailed account of the rise of politicized medicine.  As with so many things, marketing became a key part of effort to initiate a new “War on Cancer”.  Modeled after Kennedy’s Apollo moon project, vast public pressure was activated to push Congress and scientists to eliminate the disease.  In hindsight, it seems rather quixotic, but it made some sense at the time and however overly optimistic activists may have been they deserve credit for pushing the disease into the public eye.

While doctors may have been at a loss trying to treat advanced cases of lung cancer, prevention became a much more sensible and effective approach.  No single more effective method of cancer prevention exists than the cessation of tobacco smoking and Mukherjee covers the cigarette story in great detail, making it clear that the tobacco companies almost won.  If they had succeeded in getting everyone to take up smoking, there would have been no way to identify tobacco as carcinogenic.  Fortunately, a significant enough minority of the population avoided the drug, allowing epidemiologists to be able to detect the large increase in lung cancer incidence among smokers.

Somehow, Mukherjee weaves all these different stories into a thoroughly fascinating whole, scattering stories from his own clinical practice within the text as well.

Now you may think that 470 dense pages, full of cancer and death, would be simply too much to bear.  But astonishingly, while there are plenty of sad stories, Mukherjee weaves threads of hope and beauty throughout.   His writing is riveting, moving and haunting, displaying a passion and empathy that is deeply inspiring.  In the few days it took me to read it, I was always waiting to get back to it.  Combine that with an exceptional ability to clearly and concisely explain some of the most complicated science outside of quantum physics and you have a truly fantastic read.

Most biographies usually end with the death of the subject and while this is not a traditional biography, Mukherjee uses the last two sections of the book to explain why we might have reason to be optimistic about cancer’s demise.  With the advent of a deep understanding of molecular biology and human genetics, scientists have been able to elucidate the various complicated mechanisms on which cancer relies.   These details have allowed for the creation of targeted therapies that strike particular weaknesses found in specific tumors, rather than using the same intravenous blow torch for all cancers.  The time is already coming where each malignant cancer’s genome will be sequenced – each cancer is a genetically unique “individual” – allowing for a customized cure or at least a long term suppression.

Chock full of unwavering heroes, fascinating medical science, riveting history and wonderful writing, The Emperor of All Maladies is the best science book I’ve read in a long time.  Highly recommended for any general reader with an interest in the past, present or future of cancer medicine.  Even if “cancer medicine” seems like the last thing you’d like to read about, you might still be captivated.  After all, the disease affects everyone, one way or another.