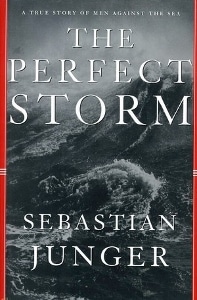 One of the problems with non-fiction writing is that the events one writes about are supposed to have actually happened.  What if you don’t know what happened?  What if it’s practically unknowable?  How do you piece together a story when your subject matter is somewhere on the bottom of the ocean?  Undeterred, journalist Sebastian Junger decided to write The Perfect Storm, overcoming this formidable obstacle surefootedly.

In October 1991, a commercial swordfishing boat – the Andrea Gail, out of Gloucester, Massachusetts – ran into one of the nastiest patches of bad weather the area had ever seen.  It was a nor’easter from hell, producing winds up to 120 miles per hour and waves over 100 feet high.  The six men on board were heading back from a successful trip along Newfoundland’s Grand Banks, some of the richest fishing waters in the world.   Unfortunately, their route took them directly into the center of this unprecedented maelstrom and they were never heard from again.  The details surrounding their demise remain unknown.

Having grown up in the Boston area, Junger was well aware of the story and while recovering from an injury he sustained while working as an arborist, he decided to write about it.  The result was published in 1997 and went on to be an acclaimed best-seller, revitalizing the genre of creative non-fiction at the same time.

The book starts with a vivid description of life in Gloucester, a rough and tumble town built on the ship building and fishing industries that has struggled ever since the cod were fished out many years ago.  He reveals what life is like for the modern fisherman, including the many hazards of the sea and the inevitable toll that the lifestyle wreaks on one’s personal life.  While it pays well, it’s not a job for the faint of heart.  Piecing together as much personal information as he can from friends and family, Junger describes how each man ended up on the ill-fated ship, providing plenty of details about longline fishing, meteorology and general seafaring along the way. 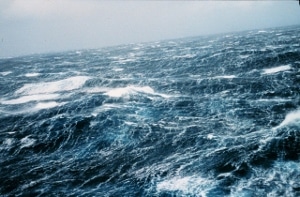 The author then proceeds with a skillful exercise in forensic oceanography, attempting to decipher the last few days of the men’s lives, despite the almost complete absence of any significant physical evidence.  Relying entirely on the facts and using them to place discrete limits on his speculation, his efforts to piece together the puzzle are thoroughly compelling and make for some consistently entertaining reading.

Interspersed with the Andrea Gail’s story, Junger also chronicles the adventures of other victims of the storm who were fortunate enough to have survived.  Following a Mayday distress call from the sailboat Satori and its three-person crew, an Air National Guard helicopter was sent to the rescue, subsequently crashing into the sea.  The story of the rescue of both crews by the US Coast Guard cutter Tamaroa is almost as exciting as main story and benefits from the presence of living eyewitnesses.

More documentary than dramatization, The Perfect Storm is nonetheless a thoroughly riveting and well-crafted account of human bravery and tragedy in the face of incredible odds.  Worthy of its wide ranging praise, I can recommend the book highly for anyone who enjoys great adventure non-fiction.  Just don’t forget the Dramamine.