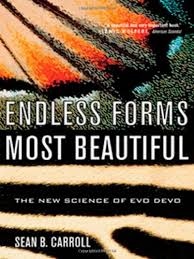 Everyone who chooses to believe in evolution knows that Homo sapiens resides on a small twig on the primate branch of the immensely sprawling tree of life.  Likewise, those who choose to believe in atoms and molecules know that DNA provides the genetic blueprint that guides the development of every organism on the planet.  What was not understood until quite recently was how to connect the two concepts.  However, major advances in the field of embryology over the past two decades have succeeded in creating a new synthesis, known as evolutionary developmental biology, or “Evo Devo” for short.  In Endless Forms Most Beautiful, Sean B. Carroll, one of the pioneers in this field, explains how Evo Devo sheds new light on our understanding of evolution, clarifying some former mysteries and overturning prior misconceptions.

Sean B. Carroll – not to be confused with the slightly younger Sean M. Carroll, a prominent astrophysicist at Caltech – is a professor of molecular biology and genetics at the University of Wisconsin-Madison.  In the first part of the book, he provides a detailed explanation of how the genetic code on DNA molecules is actually converted into flesh and blood organisms, focusing on the embryology of a broad sampling of creatures, from frogs and flies to chickens and mice. Even butterflies.  As scientists’ ability to tease out embryological details has grown increasingly more sophisticated, a complex understanding of gene regulation has blossomed.  Dozens of new regulatory genes have been described that do nothing more than turn other genes on and off, creating a vast array of controls that have a large impact on how an embryo develops into a full grown individual.  Close monitoring of how these genes behave has revealed that much of development – where limbs and eyes are destined to appear, for example – is mapped out very early in an embryo’s life.

The second part of the book takes these new genetic and embryological discoveries and explores how they have transformed the understanding of evolution.  Theories explaining the origin of a zebra’s stripes, a bird’s wings and a leopards spots – even a stickleback’s spines – are much more robust with a sophisticated understanding of gene regulation.  Surprisingly, Evo Devo also reveals how ancient our genetic lineage is, as the same genes are used to regulate the development of human limbs, fruit fly wings, fish fins and sea urchin tube feet, to name just a few.  These ubiquitous limb regulating genes are more than 500 million years old, but are still used every day by creatures great and small.  Evo Devo can also explain how mice and humans can be so very different, despite a remarkable amount of genetic similarity.  We may share many genes with mice, but if those genes experience large differences in regulation early in embryonic life, the end result can be worlds apart. 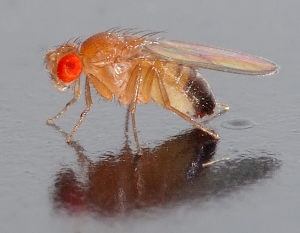 There’s a lot of complex science here – much of it may be new to many readers – but Carroll displays strong explanatory powers, often acknowledging the debt he owes to the late Stephen Jay Gould, who served as an inspirational force early in his career.  In some ways, I think that Carroll may even be better than Gould, writing both clearly and passionately about this complicated and transformational topic.

In zoology’s early days, experts in the fields of embryology and paleontology never had reason to talk to one another.  They didn’t speak the same language and tended to disparage their opposing brethren – the lab geeks versus the rock hounds.   But with the advent of Evo Devo, that dichotomy is now extinct and Carroll is at the forefront of the revolution.  Appearing on numerous Top Science Books of 2005 lists, Endless Forms Most Beautiful may be the first book on the topic, but Evo Devo is just hitting its stride and will continue to enlighten for decades to come.  I can recommend the book highly for anyone who enjoys reading about science topics, particularly evolution.