The Molecule of Life…

It used to be so mysterious, but everybody now knows that our DNA is what makes us who we are.  Long strings of simple code bundled up in our cells provide the blueprint that’s followed to make each unique human.  But despite decades of genetic science plenty of puzzles remain.  How do your cells know which DNA to use?  How does a liver cell know that it’s not a kidney cell?  Where did all this “junk” DNA come from and is it really junk?  Why do some genes 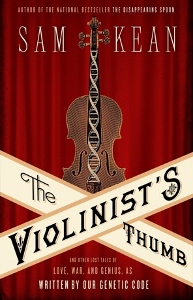 cause cancer (or Parkinson’s disease) in some people but not others?   As with much of science, the more we learn, the more questions we have.  In The Violinist’s Thumb, bestselling author Sam Kean bravely tries to make sense of it all, explaining the current understanding of how DNA makes us who we are.

The book’s title refers to Niccolò Paganini, one of the greatest violin virtuosos of all time, who because of a genetic collagen disorder had hypermobile joints that allowed him to move his fingers in seemingly impossible directions, giving him extraordinary skills with a violin.  Paganini is just one of many characters that play a role in Kean’s sweeping life story of the DNA molecule.

As he’s done previously, in The Disappearing Spoon, the author tells science history with almost boundless energy and enthusiasm.  He starts with the earliest understandings of heredity and evolution, moves on to the long journey that resulted in the discovery of the underlying DNA mechanism and finishes with current efforts to decipher and understand the entire human genome.

Now I like reading geeky science books as much as anyone – and there’s plenty of geek in this one – but what Kean really excels at is writing about the people who made it happen.  Loads of riveting and often humorous stories about an entire parade of heroes and villains – some famous, some forgotten – are scattered generously amidst some really great science writing.

Kean finishes the story in the present day with an extensive discussion of the Human Genome Project. His description of the challenges, both scientific and political, is entertaining, but I really enjoyed his speculation regarding the ethical implications and possible future uses of individual genetic analysis.

Fruit flies, pea plants, humanzees and Toulouse-Lautrec.  They’re all in here.   The Violinist’s Thumb is a wide ranging romp through the topsy-turvy world of DNA.   A great read for anyone who enjoys energetic science writing.  Even those with only one “geek” gene may find it hard to put down.