What’s on your mind…? 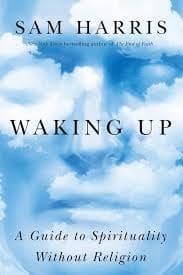 What’s going on inside your head?

Who’s in charge of your thoughts?

If your brain is nothing more than 100 billion neurons and a liter or two of accompanying goo, where does your consciousness reside?  Is it something extra?  If so, where the heck is it?

If you find these kinds of questions intriguing, you’re likely to find Waking Up quite thought provoking.  In this exploration of the mysteries of human consciousness, prominent atheist and neuroscientist Sam Harris intriguingly exposes many of the illusions that humans take for granted.

But first, he defends the idea of spirituality, stripping away its religious aspects and attempting to understand it from a neurologic perspective.  As with so much of the natural world, religion was used to comprehend mysterious phenomena until science explained them.  So it is with spirituality, an emotional manifestation of human brain activity like any other.  Harris effectively and unapologetically argues that it’s entirely appropriate for scientists to explore such topics, as they would any other.

He then goes on to try and scientifically define what is really meant by consciousness.  Is it just the enormously complicated collective action of billions of individual neurons or is it actually just an illusion?  His intellectually honest and detailed discussion of this fascinating topic constitutes the best part of the book. 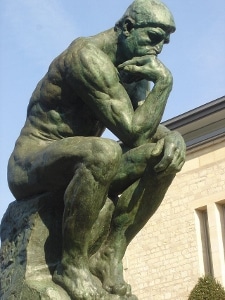 What’s on his mind?

Try to stop thinking about anything for the next minute.   Why can’t you do it?  Aren’t you in control of your own thoughts?  If you’re not in control, who is?

The second half of the book explores humankind’s attempt to control consciousness, from meditation to psychedelic drugs.  While he has extensive personal experience in this area and describes many of his “trips” in detail, Harris fails to reveal much that a beginning contemplative might find useful.  While his stories are interesting, I found this part of the book rather disappointing as he doesn’t really provide much guidance for someone seeking out their own path to enlightenment, especially since he’s found it so transformative for himself.

While I don’t think it qualifies as an actual guide, Waking Up is still a thoroughly intriguing exploration of the dilemma of consciousness, from anatomical, neurological, psychological and philosophical perspectives.  Although the book raises more questions than it answers, the convoluted discussions are so entertaining that I can still strongly recommend it for anyone interested in the workings of the human mind.

Check out my review of Lying, a recent Sam Harris e-book.