The Truth Will Set You Free…

It’s all about the pickles.  In one of my favorite episodes of The Andy Griffith Show, Barney, Opie and Andy make the mistake of avoiding hurt feelings by telling Aunt Bea that they like her new pickle recipe, even though they really think that they “taste like kerosene”.  As a result, she makes countless 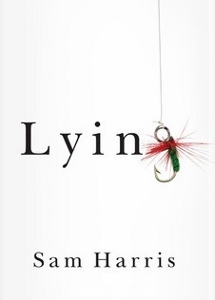 batches and the boys are obligated to keep choking them down.   The episode is just played for laughs, without significant moral overtones, but it might really have been better – for both their relationship with Aunt Bea and their digestive systems – if they had simply told the truth from the beginning.  In Lying, Sam Harris explores the moral, psychological and behavioral aspects of lying, arguing that it’s rarely justified or advisable, even when it comes to the most trivial of topics.

Now it may seem almost childish to write a paragraph, an essay or in this case a brief e-book to tell people what they already know.   Lying is wrong.  We all know this and anyone who isn’t a psychopath truly believes it, yet the vast majority of adults do it all the time, often without a second thought.  Now you may argue that the trivial lies people tell during their routine daily lives are harmless and help lubricate our social interactions, but Harris makes some convincing arguments to the contrary.

He spends a few pages discussing the various types of lies and is willing to concede that some lies are more egregious than others, but he makes it clear that it’s pretty hard to draw the line between good and bad lies.

Given that they’re the most common and that their proscription is almost counter-intuitive, Harris spends most of the book discussing “little white lies”, even addressing the most dangerous of all scenarios, the “does this dress make my butt look fat?” conundrum.  He explores how the lies we tell to avoid hurting the feelings of our friends and loved ones can have significant negative repercussions, harming the perpetrator, the victim and the relationship between the two people.   Telling white lies comes so easily to even morally upstanding adults that it seems to be hard wired into our nervous systems, but Harris encourages the reader to consider weaning oneself of this habit and offers useful examples as a guide.

He also addresses more serious situations and explains why it might be wise to tell the truth, even to criminals, customs officials or other potentially threatening individuals.

Harris – a neuroscience researcher and popular atheist writer – has impressed me with his prior works, both The End of Faith and The Moral Landscape, and this briefer work doesn’t disappoint.  While this book has nothing to do with religion or atheism, Harris displays the concision and clarity that I expect from him.  If you’ve never read any of his writing this would be an easy work to start with.  Even if you’re offended by anti-religious viewpoints, you might find that this book is worth a look.

The temptation to lie is such an intricate and intimate part of human interaction that we rarely think about it.  Lying is a revealing and eye opening exploration of this universal dilemma.  I honestly and truthfully recommend it.

Read a review of another Sam Harris book:  Waking Up