A Hero in Wartime… 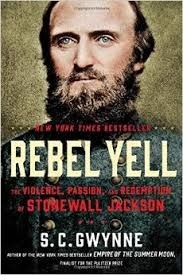 Having spent my entire sentient life in the great northern state of Wisconsin – land of cheese and ice fishing – the name Stonewall Jackson doesn’t elicit any deep seated passions in my heart.  Other than being aware that he was a prominent Confederate general in the Civil War, I didn’t know much about the man.  But when I saw that S.C. Gwynne – the recipient of much acclaim for his 2010 biography of Quanah Parker – had recently penned a biography of the famous Virginian I was guardedly optimistic, despite my lack of enthusiasm for the topic.  No caution was necessary, as Gwynne has created another remarkably entertaining historical saga, entitled Rebel Yell.

Exhaustive in its scope, the book pays particular attention to Thomas Jonathon Jackson’s early years as an instructor at the Virginia Military Institute, before the war.  Awkward, eccentric and unpopular as a teacher, there was absolutely nothing about Professor Jackson that suggested he was headed for military immortality.  Gwynne also focuses extensively on Jackson’s strict Christian beliefs, although he includes much that reveals the man’s softer, compassionate side, particularly with his family. 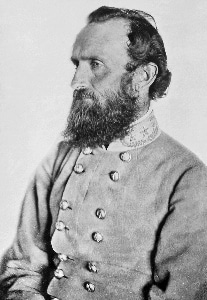 Jackson in April 1963, several days before the Battle of Chancellorsville.

But, as expected, most of the book focuses on the war and the general’s rise to fame, as the beloved Stonewall Jackson.  From First Manassas to the Battle of Chancellorsville – and every single battle or skirmish in between – Gwynne chronicles in remarkable detail how Jackson, more than any other man, gave the Confederacy a fighting chance against the heavily favored Union war machine.  Delving deep into the psyches of Jackson as well as many of the generals on both sides of the war, the author creates a truly gripping historical narrative.  I frequently found myself trying to figure out how to get back to reading the hefty tome, eschewing all my other essential tasks like work, food or personal hygiene.

Despite my enthusiasm for the book, I was often perplexed by the idea of heroism in the context of war.  While Gwynne makes it clear why Jackson came to be viewed as a hero by his fellow Southerners, he doesn’t sugarcoat any of the horrors of the war.  He also tempers much of the military hero worship with a balanced look at the general’s faults and weaknesses.  But the terrible cost of the war – a new 2011 calculation estimates a death toll of 750,000 – makes it hard to find any true honor or nobility in the whole vile mess.

Formidable in scope and jam-packed with terrific storytelling, Rebel Yell is a top notch biography of one of the most idolized individuals of the 19th century.  It’s just as good as Gwynne’s previous work, Empire of the Summer Moon, and despite the general’s unabashedly violent, Christian and Southern proclivities, this pacifist, atheist Yankee found it thoroughly riveting.  This reader is happy to follow S.C. Gwynne into literary battle anytime.