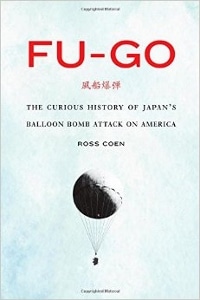 Any fifth grader can tell you that American involvement in World War II was precipitated by the Japanese attack on Pearl Harbor in 1941. And many high school students can tell you about the subsequent battle in places like Midway, Guadalcanal and the Philippines.  For most Americans these exotic battles sites were far removed from their everyday lives, but Japanese war strategists hoped to change that, hatching an ingenious plan to bring the war to North America.  Acting out of desperation as the war was turning against them, Japan constructed tens of thousands of enormous hydrogen-filled paper balloons, loaded them with incendiary devices and bombs and launched them into the rapid, eastward flowing jet stream, hoping to wreak havoc on the other side of the Pacific.  In Fu-Go, historian Ross Coen tells this bizarre, little-known story of intercontinental warfare.

Launched in the latter part of 1944, capitalizing on a seasonal increase in jet stream speed, the strange balloons started appearing in dozens of North American locales a few weeks later. Over the ensuing months, almost three hundred balloons were found, ranging all over the western United States and Canada, even reaching as far east as Farmington, Michigan.  While only one balloon caused any fatalities and the project turned out to have little impact on the war overall, it did at least achieve Japan’s goal of diverting the focus of American officials, who had to sort out the mystery and consider all sorts of contingencies, from germ to chemical warfare.

A reinflated fire balloon shot down in California.

Delving into extensive official records, both in Japan and the United States, Coen tells a detailed story, from harsh child labor in the balloon manufacturing plants to eerie reports of phantom-like objects floating across the North American wilderness. He provides plenty of information about the formidable engineering challenges that were overcome to fly these unguided weapons tens of thousands of feet in the air and half way around the world to their intended targets.  He also recounts the American response to this unforeseen attack, as quiet as it was mysterious.  The author’s description of the formidable effort on the part of scientists and average citizens to evaluate and contain this threat makes for interesting reading.  With bombs landing over a remarkably vast territory, from Alaska to Mexico, Coen also emphasizes how difficult it was to control the incoming information, as US officials wanted to avoid letting the Japanese know anything about the success or failure of their mission.

Demonstrating more skill as a historian than a storyteller, Coen’s writing is overly dry at times, but the tale of these balloons of death was engaging enough to keep me reading. I found his inclusion of numerous maps and a chart providing a detailed record of each landfall to be quite useful, as well.

Despite the fact that almost seventy years have passed, the Fu-Go story lives on as pieces of the devices continue to be found to this day, posing a potentially lethal hazard to unsuspecting hikers or forestry workers.  I can recommend Coen’s well researched and well written chronicle to any history buffs who may not be aware of this little acknowledged piece of the World War II saga.  Four out of five stars.