Told in the first person in the form of a letter, Sister is a story of murder.  It’s also a story of self-actualization, healing past wounds and a deep appreciation for the magic of unconditional love. 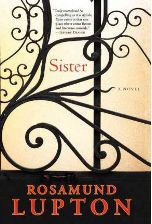 Beatrice is writing to her sister Tess, a sister that has gone missing in their native London.  Beatrice, in her adulthood, has become ensconced in a safe, controlled job and relationship in New York City.  Her free spirited artist sister, very pregnant with her first child, has vanished while Beatrice is on vacation, unwillingly cut off from her usual frequent contact with Tess by the frustrating (to her) lack of cell phone service at their cabin retreat.

Upon returning to the news of Tess’ disappearance Beatrice flies at once to London.  Despite the distance separating them, the sisters are remarkably close, sharing the minutia of their lives through phone calls and emails.  Beatrice, the elder, stable, responsible sister and Tess, the younger, prettier, more outgoing and unconcerned about money or possessions sister.  These two disparate women’s unshakable bond is revealed as Beatrice narrates for Tess her relentless search for her other half, her only remaining sibling and her only real friend – her Sister.

Through Beatrice’s narrative we come to know both women, their outer shells and inner secrets.  Beatrice unfolds like a flower as she reveals parts of herself that she has closely guarded for most of her life.  We meet and know Tess only as Beatrice sees her.  Their mother makes a substantial appearance as do various people with whom Tess has made easy friends over the years, right up to the time of her disappearance.

The exploration of narrator and sister is beautifully written through the educated words of Beatrice.  However, the book is a crime mystery as well as an examination of the women and their lives.  It is here that Sister falls slightly short.  I fingered the perpetrator too early for my taste, though author Rosamund Lupton still had some surprises up her sleeve that I didn’t see coming.  The actual plot is rather thin, made up for by the beautiful writing and ambitious depth of the characters.  4 stars out of five and recommended for those who would normally choose a “relationship” book but are looking for something with a touch of the macabre zing added to the proceedings.